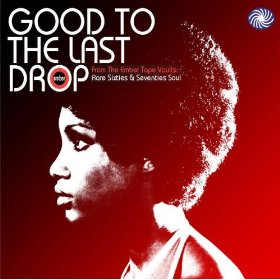 For whatever reason, some of the most interesting compilations of soul, funk and R&B are coming out of the UK. Keb Darge‘s work in this area is well-known; his comps of heretofore obscure sides are all worthwhile.

UK label Ember put out a lot of fine singles and albums in its era. As one of the most successful indie labels of the 60s and early 70s, Ember released a lot of fine material that never got a wide hearing. But Fantastic Voyage has licensed the Ember catalog and has put together an amazingly deep list of collections and album reissues.

The tracks come from a wide swath of sources, so fidelity is uneven, but that shouldn’t discourage intrepid listeners. The disc is full of highlights, and fans of soul, funk and R&B will delight in the discovery of previously unheard songs by previously unknown artisits. The driving “Compared to What” from Mr. Flood’s Party leads off the set; beefy horn charts propel the song.

Some of the songs travel in retro (even for then) styles: “Wee Bit More of Your Lovin'” from Jewel Akens sounds older than it is, but the song would be perfect for Northern Soul DJs.

Sure, some of the stuff is derivative: “That’s the Way” by the Casinos sounds uncannily like at least three other well-known songs. But that doesn’t detract from the song’s enjoyment.

Mickey Stevenson‘s “Here I Am” is the sort of cut you can play to friends and say, “Remember this? Big hit. Remember?” And they’ll nod, if slightly unsure that you’re not putting them on. (You are.)

You want Memphis style? Try Carol Woods‘ “Baby Don’t You Leave Me.” A bit looser than what the Stax cats were turning out, the number should have been the start of a big career in the USA. The well-researched liner notes will fill you in on what happened instead.

A few tunes take a turn in the direction of mid 70s soul-pop; listeners will inevitably conjure up visions of matching jumpsuits and stage settings that would look at home on the Carol Burnett Show. But that’s cool, and in this context even those numbers — like Tony & Tyrone‘s close-harmony “Everyday Fun” work well.

Comprehensive history is not the goal of the set’s liner notes, but there’s enough information given to set interested parties on a righteous path toward discovery of more like this. Helpfully, a lot of it is on other Fantastic Voyage collections.

If your collection already includes albums from the justifiably venerated usual suspects, Good to the Last Drop is a way to open up a whole new vein of compelling music. For fans of the genre, it’s essential listening.