Five Years On, a Re-memorial

Five years ago today we held a memorial concert for my friend and band mate Dave Jones. It was pretty cool: even though the band we were in together had fallen apart in the wake of Dave’s untimely death, we reunited (and our rhythm guitarist learned all Dave’s parts to play the songs one last time). People came from far and wide. Though Dave was a pretty idiosyncratic guy, he was lovable too.  Here’s a piece I wrote shortly after his death (but before the memorial show). 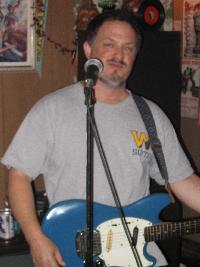 About three and a half years ago I ran an ad in the local free weekly, hoping to recruit musicians for a pet project of mine, a project I’d had in mind for years. I wanted to form a group that would play — exclusively– music from what I consider rock’s golden era. The mid-to-late sixties, when anything was possible, experimentation was the rule, and even the failures were interesting. That era just after the British Invasion (or Beat Era, depending on your geography) and before the heaviness set in. The music can be subcategorized as psych-pop, garage; whatever you call it, that’s my first musical love (side note: powerpop is my second musical love, and my plan was that if this venture didn’t get off the ground, I’d try to form a Badfinger/Raspberries sort of group).The city in which I live is fairly small, and a bit isolated, so I tried to be realistic. The odds of finding like-minded musicians in this town weren’t in my favor. My ad read, in part, “no jamwankery.” The idea was to discourage fans of Dave Matthews, Phish and –most of all — the Grateful Dead. As Jerry Seinfeld said, “not that there’s anything wrong with that.” But my vision was a group that played concise, snappy renditions of the classics and obscurities of the psychedelic/garage era, as immortalized on the Nuggets compilation albums.So the ad ran. Well, plenty of drummers were interested. I was able to pick and choose. Over the phone, even, there was no doubt that Mike Baker was the guy. He grew up in L.A. and had seen the likes of The Palace Guard and the Turtles live back in the day. No question: he wanted in, he was in.

A day or so later, well before we had gathered for our first musical get-acquainted session, this other guy called. From work. Dave was his name. “I read your ad. I love that stuff. I play drums.”

“Well,” I told him, “I’m sorry, but I’ve found the perfect drummer already.” I figured that would pretty much be the end of our conversation. 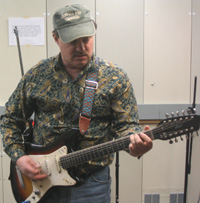 I was wrong. “How about lead guitar?” he asked, apparently undaunted.

Oh boy, I’ve got a live one here, I thought to myself. I tried my best to find a way to get off the phone. This was one of those nuts that just wants to be in a group, talent or no. I didn’t want to waste his time, nor mine.

He didn’t give up. “Tell me: are you planning to do ‘Journey to the Center of the Mind?'” I sat up straight. Not all that many people even remember the Amboy Dukes classic, featuring a young Ted Nugent. That this guy even knew it told me I should keep talking to him.

“Me too,” said Dave. “Hold on a second.” The next sound I heard was a hollow thud I knew to be an acoustic guitar being picked up.

The next sound after that nearly knocked me out of my seat. This Dave guy proceeded to play the entire lead guitar solo from “Journey to the Center of the Mind” on an acoustic guitar. The note bending, even the sustain — he nailed it all. It’s a fairly long solo by garage/psych standards. When he was done, he picked the phone back up. “Well?”

If he wanted in, he was in.

That was January 2002. Every Wednesday since then, with maybe a dozen exceptions, it was Dave on lead guitar, Mike on drums, and me on keys and vocals (plus a revolving cast of rhythm guitarists and — as chronicled elsewhere — bass players). Well over 150 nights, and about 15 or so gigs we played the music of our youth, never straying from the vision, always remaining true to the concept. It rarely paid in financial terms, but damn, was it fun. And that, more than anything else, is what kept us coming back, week after week.

Dave “Doctor Distorto” Jones died suddenly, in his sleep, in the early hours of Saturday, April 9, 2005. A myocardial infarction is what they called it: a sudden, unexpected, massive heart attack. Dave was 49.

The band was, of late, down to its core of Dave, Mike and me again. We were auditioning people and had plans to “play out” in the unspecified near future. As we would take on new members, we might change a bit, but we’d still remain true to our original musical concept, on our own collective journey to the center of the mind.With Dave gone, the band — The Echoes of Tyme — is no more. With luck and perseverance, Mike and I might do something musical together; I really hope we do. But it won’t be The Echoes of Tyme. That group can’t exist without Dave.That said, Mike and I have asked our most recent bassist and second guitarist (Dave Molnar and David Vandegrift, respectively) to join us one last time onstage as we honor the memory of our bandmate, our friend, Dave Jones. On Wednesday April 27 [2005], what remains of The Echoes of Tyme will play a farewell concert in tribute to Dave. The evening will also include three or four other groups with some connection to Dave. For us it will be a farewell to Dave, and a farewell to The Echoes of Tyme. The musical celebration of the life of Dave “Doctor Distorto” Jones will begin around 8pm on April 27 [2005] at The Watershed in Black Mountain NC. I’m pretty sure there’s no cover charge.

On behalf of the Echoes of Tyme, a heartfelt thanks to everyone who’s ever attended a show, bought the album, or offered us words of encouragement. If you’d like to join us as we celebrate our friend, come on out.

(An excerpt from this piece was quoted in the Asheville Citizen-Times in April 2005.)