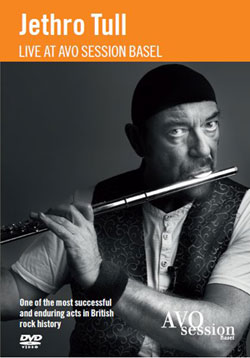 In his best-selling 2005 book Healthy Aging, Andrew Weil MD sets forth a compelling and ultimately convincing argument concerning the benefits of aging. Using the examples of wine, whiskey, cheese, beef, trees, violins and antiques, Weil argues that some things do in fact get better with age. As you might guess, once he’s discussed those seven items, he widens his argument to include humans.

The flute playing of Jethro Tull founder/leader Ian Anderson could well be Exhibit A for Weil’s thesis. Anderson has been fronting the progressive-folk-rock group since the late 1960s, and in fact only took up the instrument around that time. (His stated reason for choosing the flute is amusing — read about that and much more in my extensive interview with Anderson, here.) Over the years, Anderson’s mastery and control of the flute — in a style heavily influenced by jazz multi-instrumentalist Rashaan Roland Kirk — has only improved.

The new concert video Live at Avo Sessions Basel provides ample proof of this. Backed by the current version of Jethro Tull — one that still includes linchpin Martin Barre on guitar — Anderson puts the flute through its paces. And at age 62 he’s — amazingly — still able to leap about the stage and do his trademark stand-on-one-leg routine. His playing is expressive, imaginative, and often nothing sort of amazing.

Anderson’s voice is, slightly, another matter. Perhaps oddly, for a man whose primary instrument is flute, Anderson often sounds, well, a bit winded when he sings. He doesn’t have trouble hitting the notes, exactly. But when he does hit them he sometimes sounds out of breath.

More troubling, on several tunes Anderson sings out of tune. Let me explain: to my mind there are two kinds of out-of-tune-ness. The first (and most common) is of the “I just plain don’t know how to sing” variety. Examples include the non-Autotune-corrected work of, say, Paula Abdul; and anything by Sid Vicious (though Vicious was arguably endearing due in part to his lack of finesse). The latter is a product of a breakdown in communication between the monitor system and the musician’s ear. In other words, the player or singer can’t hear the music well enough to follow it.

That latter variety of out-of-tune-ness is easily identified by one characteristic: the singer is well in tune with him or herself; all of the notes are in the same key. It’s just that the overall vocal product is a semitone or two sharp or flat relative to the music. And it’s that dissonant variety that many of the songs on Live at Avo Session Basel suffer. Anderson sings well, and in tune, so to speak, but he’s not quite in the same key as the instruments. To a completely untrained ear, the effect might not be noticeable. To a moderately trained listener, it’s distracting and dismaying. This reviewer suspects that to a highly and precisely trained ear, the vocals on this set might approach the realm of unlistenable.

Kudos are due, in a sense, to Anderson and the producers of this DVD for not sweetening the audio to correct for this. What we get is a warts-and-all performance, and in fact the pitch problem does come and go throughout the set’s fifteen numbers. The playing is peerless throughout, serving up copious amounts of (metaphorical) shade and light.

Throughout a set that leans heavily (but not exclusively) on older material, Anderson takes the time between songs to provide narrative context. His comments add considerably to the enjoyment of the set, especially as they’re delivered in his grand and booming oratory (which itself is odd, juxtaposed as it is against the previously mentioned occasional windedness of his singing).

The set is beautifully filmed. On a TV soundstage in Basel Switzerland using minimal but effective colored lighting, the five-piece band is set up on a cleanly organized stage. Anderson switches deftly between flute, miniature guitar, and harmonica (he makes self-deprecating comments as to his harmonica-playing ability; listeners may well argue with his assessment).

Even on a non-HD screen, the picture quality is nothing short of magnificent, and the sound mix is flawless as well. As a modern document of the 21st century variant of this veteran group, Live at Avo Session Basel is recommended with consideration of the caveats mentioned herein.