Happy Birthday to Johnny Winter. Here’s a feature I did on the legendary bluesman from a couple years back. 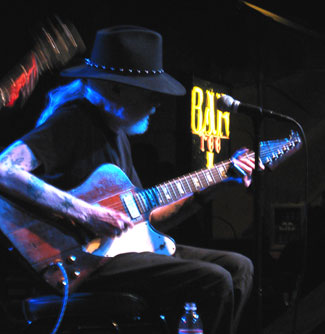 Blues/rock legend Johnny Winter is one to-the-point dude. His second guitarist (and manager) Paul Nelson–a fine guitarist in his own right–coached me in advance: “hit him hard, because he’s not…wordy.”

Nelson was right. The 63 66-year old Winter–famed for his fleet-fingered guitar work, his meteoric rise in the late 60s, his work with brother Edgar and with Muddy Waters, his (now behind him) drug problems and his albinism–tends to give terse answers to interviewers’ queries. Yet he’s not hiding anything: “ask me. I’ll tell you anything you want to know,” he says, and I believe him.

Winter and his ace band (a trio for all but the first and last few songs, on which Nelson joins on second fiery guitar) were, at the time of our interview, in the midst of a tour (question: “Johnny, what will you do when this tour’s done?” Answer: “Keep on touring”).

His playing has lost none of its fire; close your eyes and it’s still 1973. Always thin and frail, these days Johnny is guided out to the front of the stage, where he is seated in a chair. There he remains the entire show. Most of the gig finds his pencil-thin fingers burning up the fretboard of his headless Erlewine Lazer. True to his taciturn nature, he speaks little to the audience, but both acknowledges our presence and feeds off our energy.

Born to play guitar, he seems to be having the time of his life. The area in which I am most able to draw Johnny out concerns his connections with other legendary musical figures. He is glad to talk about them. “The first time I ever met Janis Joplin, we went to a movie together. We saw Myra Breckenridge,” he chuckles, recalling the X-rated film starring Raquel Welch and Mae West.

In the mid-70s Winter recorded a little-known John Lennon song, “Rock and Roll People.” He tells me, “I asked (John) for a song, and he sent me a tape of that one. I met him once, at the Hit Factory (recording studio) in New York. He came in there to get away from his fans.”

Stevie Ray Vaughan is one of the few white guitarists who worked musical territory similar to Winter’s. In fact for years Stevie Ray used members of Johnny’s original band. “We played together over at (bassist) Tommy Shannon‘s house one time.” Asked to compare their playing styles, Johnny admits that “mine’s a little bit rawer, I think.”

Johnny holds a special place in his heart for the late Muddy Waters (drummer Wayne June reminds the audience that “Muddy considered Johnny his son”). “I loved working with Muddy. Real easy to work with. A good guy…a lot of fun.” Their collaborations were natural, organic. “We used to do just about everything in one take.” In fact, as guitarist/collaborator/producer, Winter won three Grammy® awards for his work on Muddy’s albums. A collection of live and unreleased Waters/Winter material, Breakin’ it Up, Breakin’ it Down was released earlier this summer.

With more than three dozen legitimately-released albums (plus other unauthorized releases), Winter–like many artists–doesn’t have complete control over his catalogue. It does bother him that other people own his recorded work; reasserting control over the catalogue is one of his (and Nelson’s) priorities.

But the focus is always squarely on the music. His most current release is I’m a Bluesman, filled with interpretations of blues standards that are purely Winter in their execution. “We’re working on another album now. The working title is Roots.” A collection of acoustic- and electric-based tracks, Johnny says it will include “songs I learned from people who really influenced me.” His criteria for picking a song is simple: “it has to be something I wish I’d written myself.”

Winter often makes the songs sound as if he had written them. For the encore of this night’s show (including a typically incendiary version of Dylan‘s “Highway 61 Revisited”) Winter pulled out the guitar most closely associated with him, the Gibson Firebird. “I like the way it looks, and I like the way it sounds,” he tells me.

Reminded of the current effort to get Johnny into the Rock and Roll Hall of Fame, he admits, “I’d like that a whole lot. I hope it happens.” In a moment of unabashed fandom, I tell Johnny that I think he’s one of the finest guitarists–blues or otherwise–that the world has ever known. I ask him how he’d like to be remembered. “That way,” he laughs. “That’d be perfect.”