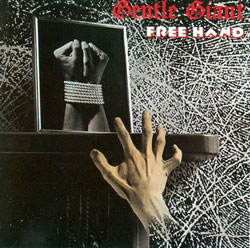 Sporting a sound that’s at once highly polished and more accessible than anything the band had done before, Free Hand remains firmly in the progressive rock camp. A challenging listen, it’s the best point at which to enter the Gentle Giant catalogue. It’s easily the group’s most consistent, best album. Gentle Giant always had a playful relationship with sounds, and they made it a point to establish that right at the outset of their albums. In a Glass House led off with the sounds of breaking glass, and their tour de force, 1975’s Free Hand, opens to the sound of fingersnaps (hands — get it?).

Not just any finger snaps, mind you: with Gentle Giant, it’s not exactly finger poppin’ time. The snaps establish the beat and time signature for “Just the Same,” a delightfully off-kilter romp that bears all of the stylistic hallmarks of this progressive rock group. Handclaps, loopy saxophones, cutting electric guitar and Derek Shulman‘s nimble vocals all add up to make “Just the Same” a successfully rocking prog tune.

From there it’s into the multi-tracked vocal workout of “On Reflection.” Shulman’s vocal weaves in and out of some fairly intricate melodies. Head-spinning in its complexity, “On Reflection” nonetheless remains a fun, engaging tune. A midsection serves up that lovely, lilting medieval vibe Gentle Giant listeners have come to expect. But in keeping with the expected-to-be-unexpected left-turn approach of UK prog, John Weathers‘ thundering tympani punctuates the proceedings. Then, back to the renaissance faire, replete with string section and Kerry Minnear‘s tuned percussion. If that weren’t enough — and it so rarely is with Gentle Giant — the track blasts into a rocking arrangement that equals the best work from Yes in its inventiveness and intensity. Ray Shulman‘s bass remains an underrated but key component of the Gentle Giant aesthetic.

The title track from Free Hand opens with a tricky piano figure and counterpoint bass guitar line that portends something big. And when that something comes, it’s a heavily distorted clavinet, joined quickly by a high-flying Shulman vocal and a demented, ramshackle melodic line. Tricky time signatures and a forceful delivery make “Free Hand” a dizzying ride. It also rocks, and hard. An atmospheric middle section calms things down a bit, but still includes ace soling from various band members. Back into the song’s main section, the bizarre riff repeats so many times that it forces its way into the listener’s skull. Then it stops unexpectedly. “Free Hand” is among the most fully realized tracks Gentle Giant would ever commit to tape. (And they pulled it off credibly live as well, as witnessed on Playing the Fool, also scheduled for re-release).

Those three songs are impressive enough that the remainder of Free Hand could be filler and the band would still have a classic on their hands. But no. “Time to Kill” starts out with an ominous feel, but quickly segues into a art-pop-prog aesthetic, something like a cross between King Crimson and 10cc. Kerry Minnear’s fast and flowing keyboard runs propel the tune forward while adding copious color.

The presence of only bass, guitar and percussion often signals the approach of straight-ahead music. But not in the intro to “His Last Voyage,” wherein Gentle Giant weaves a textured tale with a lilting vocal. The song’s fascinating interplay between Ray Shulman’s bass guitar and Kerry Minnear’s tuned percussion is a highlight. A couple of minutes in, the instrumentation gets heavier but no more conventional, as the band holds forth in Free Hand‘s jazziest moments. Gary Green adds an unexpected, distorted wah-wah guitar solo atop Minnear’s piano-led figure.

The instrumental “Talybont” sounds like a middle ages-influenced Emerson Lake and Palmer. The straightforward melody is the basis upon which the players build an increasingly complex set of solo pieces.

“Mobile” wraps up the album. Charting a path between Fairport Convention and Caravan while maintaining their own identity (thanks in large part to Derek Shulman’s distinctive vocals), Gentle Giant manages to rock out. But they do so without betraying the slightest influence of American rock and roll. Like most of the music on Free Hand — and really, like most of the music in Gentle Giant’s decade-spanning catalog — “Mobile” distills the influences of various strains of European music into a heady and unique brew.