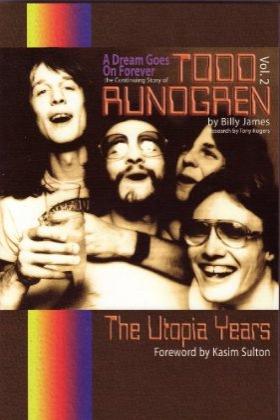 Covering the life and career of Todd Rundgren is a serious, sprawling undertaking (trust me!). The prolific multi-instrumentalist has recorded and released several dozens albums, first as a member of proto-powerpop sixties group Nazz, then as both a solo artist and member of Utopia. He’s been at the forefront of technology (sometimes too far out in front) and has made important contributions in the fields of recording, internet content delivery, interactive media, video and computer software. As a producer for hire, he’s worked the boards on some of the most popular and/or critically acclaimed recordings of the rock era.

Along the way, he’s had some hits and some misses, but his career has never made for less than a compelling story. His legion of fans (relatively small in number, but as dedicated in their own way as Deadheads) follow his every move. Past age sixty, Rundgren is still turning out new and interesting material.

That said, and despite a few high-profile hits (“We Gotta Get you a Woman” in 1970, “Hello, It’s Me” in 1972 and “Bang the Drum All Day” in 1983) Rundgren’s iconoclastic approach guarantees that he’ll remain a cult artist. He’s revered by those who know his work, but unknown to most in the mainstream.

For the former, Billy James‘ work is a gift. Musician/author James has tackled musician bios before: he has written books about Captain Beefheart, Grand Funk (Railroad) and others. But Rundgren’s oeuvre requires a detailed and lengthy approach. So it was that James published the first volume of A Dream Goes on Forever: The Continuing Story of Todd Rundgren in 2002. That book covered Rundgren’s life and career up to 1976. The thick volume was full of interviews with many who had worked with Todd over the years; review and article reprints; and the author’s own perspective.

In the mid 1990s, Rundgren himself was reported to have begun work on an autobiography; there’s been no update since then. And no autobiography has appeared. So those interested in delving deeper into Rundgren’s history are left with James’ books (Rundgren was not involved on any level with the project).

The second volume was published in late 2009. Subtitled The Utopia Years, Volume 2 picks up where the previous volume left off and runs through the group’s dissolution in 1988.

James uses the same approach (interview quotes, article and review reprints etc.) in this latest volume. In many ways it’s a superior book; perhaps because it covers a more recent time period than the first volume, many of the quotes are first-hand (rather than sourced from the previous work of other writers). The book charts the rise and fall of the four-piece version of Utopia, with equal weight given to coverage and discussion of Rundgren’s solo work during that period.

Plenty of ink is used covering the internal and external tensions that ultimately derailed the band, but while Volume 1 relied greatly on interviews with personalities who, shall we say, had an axe to grind (Moogy Klingman, for example), most of those involved in the period covered by Volume 2 have, on balance, a positive outlook about the period.

Some of the book’s extensive research was conducted by noted Rundgren collector Tony Rogers; in Rogers’ afterword, he makes slightly petulant remarks in response to reader complaints about the first volume. Specifically he dismisses concerns about editing and binding of the volume. In truth, both were serious issues in Volume One; while well-written and organized, the book was rife with errors. And the binding did fall apart readily. But neither of those kept that book from being an essential read for anyone with more than a passing interest in Rundgren’s career.

Both of those problems have been addressed (to some degree) in Volume Two, and the result is an even better book. Those hardcore fans will want both, but since James helpfully starts out Vol. 2 with a capsule summary of the first book, Vol. 2 is the one to get.

At the rate he’s going, James will likely need two more books to bring the story up to date. And since Todd’s as busy as ever, depending on how long that takes, who knows — we may some day see Volume 5.