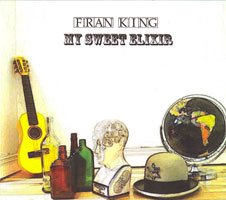 Fran King has been called an Irish McCartney. A more apt comparison might be Hawthorne California’s Emitt Rhodes. Like both Sir Paul and the mercurial Rhodes, King is possessed of an unerring sense of melody, but like Rhodes, he doesn’t rock out. His songs and arrangements have plenty in common with tracks on McCartney and (to a lesser extent) Ram, but little connection with the side of McCartney that worships at the altar of Little Richard.

King sounds unnervingly like Macca on “The Note,” a lovely song that calls to mind “My Baby’s Request” from Wings’ near universally (and unjustly) maligned Back to the Egg. And on “Father and a Son” King sounds like he’s spent some quality time spinning Flowers in the Dirt; the song is a musical and lyrical cousin to “Put it There.”

“I’ve Got a Feeling” — no relation to the Let it Be number that’s a feature of McCartney’s most recent tour — goes prospecting in country-rock territory, and sounds a bit like Poco.

Fran King is perhaps best described as a singer/songwriter; there aren’t any rocking number on My Sweet Elixir, but King is possessed of more character than many artists working in the singer/songwriter genre. His clear-as-a-bell voice ends up being the focal point of every song, irrespective of the arrangement behind it. What that means, ultimately, is that My Sweet Elixir doesn’t work as well as similar efforts as musical wallpaper; his songs invite closer attention, active involvement.

King’s voice cracks on the highest notes of “Fools Gold,” but rather than being a flaw, the result is a shade more authenticity, vulnerability. The title track “My Sweet Elixir” dispenses with vocals completely, and instead layers on Spanish guitar, mandolins and Mellotron flutes. The song conjures up an atmosphere not far removed from the Band‘s “Theme from The Last Waltz.”

By halfway through My Sweet Elixir, the overall vibe is not unlike a James Taylor album with McCartney singing instead of Taylor. Subtle hints of Neil Finn‘s work crop up in “No Remorse (I Feel Every Word)” but while King’s a fine songwriter and vocalist, his tunes don’t scale the ear-candy heights of Crowded House.

“Til We Die” is reminiscent of McCartney’s “Junk” with more instrumentation. “Upstream” is the only track on My Sweet Elixir where King sounds even vaguely Irish; the lilting waltz arrangement suits his plaintive, melancholy vocal. Cellos — used throughout the disc — figure most prominently in this song than in any of the disc’s other tracks.

My Sweet Elixir is rounded out with “Turning of the Tide,” a song that features King’s vocal line “only the beginning” as its hook. It’s a fine and mildly clever way to wrap up the album, a way to telegraph “see you soon” to listeners.

A hidden bonus track — wow: people still do that in the 21st century — isn’t so much a song as a snippet, but it sounds like the coda to an unreleased Badfinger tune. This might suggest an interesting direction for King to pursue in future releases.