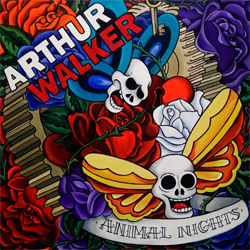 I know that “angular” is one of those critic-overused adjectives used to describe, well, post-rock, itself another overused descriptor. but Arthur Walker (a band, not a person) makes some angular music. They play kinetic, frenetic, skittery songs that call to mind early-early XTC (“Are You Receiving Me?” era) with vocals that evoke memories of Feargal Sharkey (of the Undertones). They also sound like a much more rock-oriented version of 70s art rock band Sparks.

There’s plenty of texture, shade and light in the songs, but they all sport that sped-up, off-kilter vibe. “Angles and Lines” has vague hints of the Jam, but they’re applied in such a way so as not to appeal much to Jam fans. Much of the group’s sound gives the aura of a slightly-too-weird-for-1979 band out of some provincial English city. Durham or Dover, maybe. So it’s little surprise to learn they’re from Plymouth; one can’t get much further out of England than that without getting wet.

There’s a quirkiness to Arthur Walker’s music that might attract fans of some of Robyn Hitchcock‘s more rock-oriented work. Their lyrical concerns — ebola viruses and whanot — would make an Egyptians fan right at home. The group does hew pretty closely to the I/you/they subject matter, but they do so in a truly skewed way. Songs with titles like “I am a Skull and I am Evil” and “Face Ache” suggest things area bit unsettled over in Plymouth.

The songs are in turns high powered and subtle. Arthur Walker exhibit ample use of dynamics; in fact their dynamics veer perilously close to art-rock, and I’m pretty sure that’s not at all their intention. The group’s arrangements smack of college-educated background. They manage the “big guitar” ethos now and then, but several songs betray influences of ska, and Police-variety reggae.

Arthur Walker’s tunes start out as conventional melodies, but the quartet delivers them in a way that keeps the listener off-base. Try dancing to this stuff (or even tapping your foot) and you might end up in an emergency room. There’s a bit of screaming, but it’s lightly applied, and more often or not Steven Stones’ warble is joined by harmony vocals from the other band members. Playing is precise — it’d have to be to execute the ambitious stop-start arrangements the band so often employs.

In sum: imagine weird, quirky post-rock new-wave played by prog musicians, and you’d conjure up something not unlike Arthur Walker. Snotty attitude and sheepskins, that’s what I hear. Fun, and not overly reminiscent of much else.