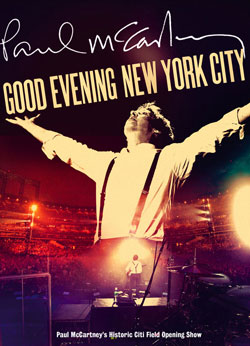 At age 67, Paul McCartney has nothing to prove. As the world’s most successful songwriter, with a vast back catalog of Beatles, Wings and solo albums, he could easily (a) retire without recrimination or (b) put together an oldies package and tour on the strength of his older material. He’d be well within his rights to do either, and there’s plenty of precedent for doing so.

Regarding the former, two of his former bandmates both stepped out of the limelight for extended periods (though both did return with excellent albums right before their untimely deaths: John and Yoko‘s 1980 Double Fantasy and George Harrison‘s Brainwashed). As far as the latter, the Moody Blues — owners of an impressive back catalog of their own — haven’t released an album of new material in a decade, barring their Christmas album December. Yet they tour regularly to packed houses, and remain an engaging onstage presence.

Yet McCartney — that’s Sir Paul to you — is that curious mix of restless artist and born entertainer. Not to beat the dead horse of the John vs. Paul dialectic, but McCartney would never chew gum onstage. His lot in life as a performer is to make audiences happy: to, as Ray Davies put it, give the people what they want.

McCartney is also on quite a creative roll. Beginning with 1997’s Flaming Pie (though as far back as 1989’s Flowers in the Dirt there were hints that there was plenty of creativity left in Macca), Paul McCartney hasn’t released a less-than-very-good studio album. While he may not have to prove anything to us, he makes music to express the themes that matter to him, and the result is quality music — and often rock music at that — from a man in his 60s.

Still, one can argue that the world doesn’t need another McCartney live album. Starting with Wings Over America in 1976, the man has released live sets in 1990, 1991, 1993, 2002, and now 2009’s Good Evening New York City. Each has served up a mix of solo and Beatles material, played well and recorded clearly. So why should anyone care about this latest set?

First of all, for long-time McCartney fans, there are some real gems here. Songs that McCartney has never performed live make their appearance on this set: “Mrs Vandebilt” from Band on the Run, and two Beatles songs: Let it Be‘s “I’ve Got a Feeling” and the “Help!” B-side “I’m Down.” And along with the requisite number of newer tracks, there are heartfelt (not maudlin) musical tributes to Lennon and Harrison. And there are even live versions of not one but two tracks from the latest Fireman album.

“I’m Down” is a sentimental favorite, and of particular relevance at this set of shows. As every Beatles fan knows, the group played Shea Stadium. McCartney was chosen to do a set of inaugural dates at NYC’s Citi Field, site of that now-demolished venue.

Yes, plenty of songs that we’ve heard McCartney and his band do over and over are still in the set: “Sgt. Pepper”, “The End”, “Live and Let Die”, “My Love”. The current band — the same one heard on 2002’s Back in the U.S. — is superb in their recreation of the sound and feel of the studio versions. And not to downplay the contributions of those players, it should be noted that the Paul McCartney/Paul “Wix” Wickens relationship now ranks as Paul’s longest musical collaboration (well, it actually ties roughly with the Paul/Linda collaboration, but still): while it’s perhaps making too much of it to point out that the timeline of McCartney’s critical ascendancy does pretty well correspond to his bringing Wix on board, the fact remains that Wix is the unsung hero of McCartney’s live shows. Wickens faithfully recreates all of those little sonic cues one expects to hear in the songs, and he does so in as organic a fashion as can be managed under the circumstances.

Good Evening New York City is available in a few different configurations. This reviewer’s copy comes with a DVD of the 33-song entire concert, two audio CDs covering the same material, and a bonus DVD of material from a Letterman show performance. The whole set is beautifully packaged in a (plastic-free, natch) hardbound book that resembles nothing so much as an old Hardy Boys (or Nancy Drew) book. If you’re a fan of McCartney or the Beatles, watching this DVD might actually choke you up a bit. As live sets go, one could put this on the shelf alongside Wings Over America and Unplugged and safely ignore the others.

With this set evoking memories of the Beatles’ historic 1965 Shea Stadium concert, let’s hope that there’s an ulterior motive for this set: to whet the public’s appetite for the long-delayed legitimate release of The Beatles at Shea Stadium on DVD. I mean, my bootleg copy is nice and all, but the lack of an official version — digitially restored, if you don’t mind — is a serious crime of omission.