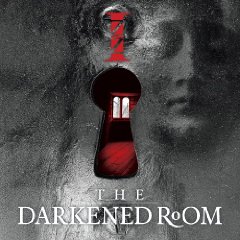 How accurate would it be to categorize New York-based IZZ as a progressive rock group? To paraphrase a former U.S. president, it depends what your definition of IZZ is.

The six-member IZZ does exhibit some of the trappings of progressive rock: a suite-like approach to song structure and album flow; impressionistic lyrics. But their musical approach is a bit…friendly to fall neatly into the progressive rock camp. The ten songs on their latest, 2009’s The Darkened Room do bear titles like “Can’t Feel the Earth, Part II,” but there’s plenty of accessibility in their music.

IZZ is “progressive” more in terms of their sweeping, magisterial arrangements (think of Pink Floyd) more than in terms of their playing. The focus is on ensemble playing, so while there are some impressive instrumental displays, the net effect of all the instruments is what’s important here.

“Day of Innocence” takes an approach — having the melody led by a muscular bass figure — that’s quite reminiscent of Rush. “Ticking Away” takes a pop melody and perches it precariously atop an odd time signature. The opening of “Can’t Feel the Earth, Part II” combines elements of Rush, Yes and even a bit of Canterbury prog favorites Caravan.

The house-of-mirrors piano on “Can’t Feel the Earth, Part I” may offer evidence of what Gentle Giant drummer John Weathers meant when he recommended IZZ to this reviewer, approvingly calling them an “excellent young band…a nice little band.” Meanwhile, inspiration occasionally seems to come from some odd places. Toward the end of the track, there’s a section that sounds like nothing so much as Drama-era Yes. And throughout the album, the vocals evoke mid 70s hitmakers the Alan Parsons Project.

Throughout the album, the group effectively employs its impressive vocal talents (three of the six are credited with vocals). Annmarie Byrnes’ high harmony vocals add drama and emotion to already-dramatic and emotional songs. Even in modern times, the presence of a female lead vocal is something of a novelty in prog; and here it’s no gimmick: while Byrnes doesn’t sing lead on every song, her voice is always put to good use.

Lyrically, it isn’t very clear what The Darkened Room is on about (it could be religiously-themed, but that’s merely a vague suspicion on this reviewer’s part), and that seems to suit the band just fine. Bassist John Galgano is quoted as saying, “There is a concept. But we’d prefer to let people take from it what they get out of it, without the influence of our explanation.” That said, The Darkened Room is the first part of a two-album concept, and the next disc is already in production. So interested parties will have to stay tuned.