Album Review: The Chesterfield Kings – Live Onstage…If You Want It 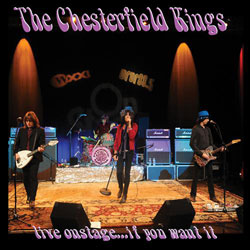 Graham Gouldman — yeah, the guy who wrote “For Your Love,” “Heart Full of Soul” and other hits for the Yardbirds, and was one of the original members of 10cc — may be positioned to pick up some loose change. More on that forthwith.

You don’t title your album Live Onstage…If You Want It and expect not to get compared to the Rolling Stones. So, with a few quite notable exceptions, that’s what I’m gonna do here. The latest offering from The Chesterfield Kings (named after an unfiltered cigarette popular in the last century) does in fact borrow a phrase from the Stones for the title of this CD/DVD package. And that’s not all they borrow.

The Chesterfield Kings started out as a garage revival band of the first order. The first two albums (1982’s Here Are the Chesterfield Kings and 1985’s Stop!) mined the fuzz-and-Farfisa sounds immortalized on Nuggets, Pebbles and similar unearthing, unearthly compilations. But while those early Chesterfield Kings tracks sported an affinity for the garage-punk ethos, that was quickly dialed down in favor of a Stones approach. Arguably, since most of those 60s garage acts took their musical and attitude cues from the Rolling Stones, it made some sense for the Kings to go to the “source” for their own inspiration. (This idea neatly sidesteps the fact that the Stones took their influence from American R&B, but whatever.)

These days, the Rochester NY-based Chesterfield Kings are to the Rolling Stones what Charlotte NC’s Spongetones are (or were) to the Beatles. (Actually the Spongetones started out doing Beatles pastiches but have since forged their own identity. The Chesterfield Kings traveled in the opposite direction). When I was a kid, things were such that you were more or less expected to love either the Stones or Beatles, but never both. Luckily that’s no longer the case.

Both the ‘Tones and Kings manage the deft feat of writing original songs that sound like outtakes from their respective favorite band. Both groups are keen students of the subtle nuances that made the 60s giants special; at their best, they do much more than simply ape the licks and poses. At their worst, they don’t. The swagger and energy of the Chesterfield Kings on record closely follows the Stones in their prime.

That said, while the audio half of Live Onstage…If You Want It burns with energy, there’s a certain spark missing from the DVD (even though it’s the exact same performance). The sound is ace (thanks to Ed Stasium) and the band is in fine enough form, but for once the audio’s better without the visuals. Lead vocalist Greg Prevost does his best slave-to-the-Mick schtick, but he takes his sartorial cues from the New York Dolls (who, of course, took about half of their cues from…three guesses here).

And the audience. They just sit there, clapping politely at each song’s conclusion. Around the time of the last song, they’re shown getting on their feet, finally, but the Chesterfield Kings deserve better. They worked hard (and succeeded) at putting on a good show. Yet all that could have been cleverly downplayed with selective editing (in other words, don’t show the audience if they’re not worth showing!). Perhaps, seeing as this was shot in a studio, the session was on a Monday morning or something. But seeing that audience is, honestly, a downer. Better just to hear the songs, or see the band yourself (and get on your feet!).

Still, there’s the music. The CKs make no bones about it: they’re Stones acolytes. And their thinly-veiled rewrites are never less than interesting, good songs. Admittedly, it’s a fun (if none too difficult) exercise to play spot-the-inspiration on the tracks on the album. “Transparent Life” is a nick of “Paint It, Black” with its trademark insistent floor-tom rolls. “Flashback” is a shameless lift of “Jumping Jack Flash,” right down to the “one-two!” intro and the “it’s a gas” line near the end. “Stayed Too Long” nails the loose-limbed, shambolic aesthetic so essential to the Rolling Stones; most of the other songs get the feel right but are played pretty tightly (not as if that’s a bad thing).

The Kings don’t limit themselves to the stylings of the Brian Jones era, either; mid-way through the sixteen-song set, the group dials things down and settles into a four-song “Country Honk” vibe that convincingly evokes the Mick Taylor days. The pedal steel player who sits in for those numbers adds a lot of nuance to the group’s sound.

After the acoustic-led numbers, the band kicks back into high gear; “Stayed Too Long” features a sax-led cacophony that evokes the Stones’ boozy 70s aura. “Outtasite!” cranks up the (sampled) cheesy organ for a track that neatly combines the Stones vibe with the garage feel of the Kings’ earliest albums.

But the visuals do highlight a troubling flirtation with artificiality; if you’re gonna do this stuff, it’s gotta be real. Yes, they’ve got the look, right down to Andy Babiuk‘s Vox Phantom bass. But camera close-ups of the auxiliary keyboard player show him playing a modern keyboard. If that’s not blasphemy — and frankly, it isn’t — the sight of a music stand with charts arguably is. This ain’t Paul Shaffer; it’s 60s styled rawk. We don’t need no stinkin’ charts!

To be fair, even in their prime the Stones rarely rocked as hard (or, it must be said, as convincingly) as the Chesterfield Kings do on tracks like “Dawn.” But then there’s the matter of a couple of the other songs in this set.

Which brings us, almost, back to Graham Gouldman. But first, there’s the set opener “Up and Down.” Yes, it’s a thinly-veiled rewrite, but not of a Rolling Stones number. No, “Up and Down” sounds very very very much like “Gone Movin’ On” by none other than Paul Revere and the Raiders. And we’re having none of that “My Sweet Lord” styled unconsciousness: Prevost and Babiuk (the group’s two founding members) are keen students of the garage-rock milieu of which Revere’s merry men were a significant part. Don’t tell me they didn’t know what they were doing when they wrote the song.

And then there’s “I Don’t Understand.” Well, I do: Prevost and Babiuk teamed up with Little Steven Van Zandt (who most certainly knows better) and “rewrote” (just barely, mind you) a Graham Gouldman song called “You Stole My Love.” That track, performed by Gouldman’s group the Mockingbirds, appeared on the compilation Nuggets II: British Empire and Beyond. Is “I Don’t Understand” a great song? You bet it is. Is it better than its clear source? Perhaps not.

Anyway, until the Rolling Stones make an album (or even a song) as good as anything they did prior to Mick Taylor leaving the group, Live Onstage…If You Want It is as close as listeners can get to that vibe. And for that, the Chesterfield Kings are to be admired, thanked, and listened to. Emphasis on the “listen.” The CD is, for the reasons outlined above, superior to the DVD. Alas, the package comes with both.