As the old cliché goes, sometimes the apple doesn’t fall far from the tree. In 2007 Dhani Harrison debuted his new band (originally to be called beatson ), thenewno2. While the group took their name from the villain in Patrick McGoohan‘s groundbreaking late-sixties TV miniseries The Prisoner, there’s not much else backward-looking about thenewno2. The group writes pop songs with classic influences, but delivers them in a completely modern fashion.

The group — initially Harrison on guitars and allsorts, plus Oli Hecks on percussion and more allsorts — released a four-song EP titled EP001 way back in 2006. they followed that up in 2008 with the (digital-only) singles “Choose What You’re Watching” and “Another John Doe”. When they released their debut long player You Are Here in 2008, they resisted the temptation to fill it with the already-recorded tracks. When the album finally saw physical release in 2009, a few extra tracks were appended. 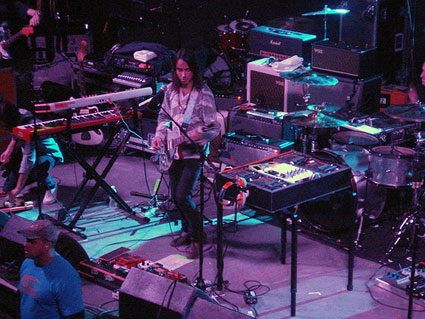 thenewno2. Photo courtesy Belinda Butar Butar
From their start, thenewno2 have sought to maintain creative and business control of their output. First credited with artwork on some of George Harrison‘s last projects, thenewno2 handled most or all aspect of their own album packaging and design.

The group finally embarked on a tour in late 2009, third-billed to Wolfmother and the Heartless Bastards. I saw their six-song set onstage in Charlotte NC at the Fillmore in early November.

The group — Harrison on vocals, guitar and myriad stomp-boxes, plus four other guys — opened with “So Vain” from You Are Here. The group’s live sound highlighted an ultra-heavy rhythm section with hyperactive drumming, and kinetic use of samples and loops. Yet the music remained primarily guitar- and keyboard-based. The midtempo “So Vain” ended with an edited sample of the famous opening-credits dialogue of The Prisoner (“Who are you?” “The new Number Two.” “I am not a number; I am a free man!”). That wasn’t included on the album, probably due to licensing issues.

The Wurlitzer-sample based “Give You Love” was up next. The song highlighted Harrison’s vocal similarity to his late father. Even more hyperkinetic drumming and liquid analog bleeps were the central features of the song, and Harrison re-created the studio version’s squawking chorus vocal by using a bullhorn. The slow-on-top-of-fast dynamic was a highlight of the propulsive-yet-dreamy number. 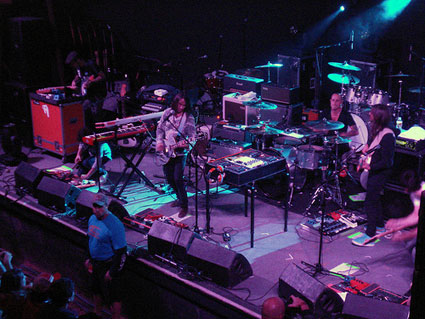 thenewno2. Photo courtesy Belinda Butar Butar
“Out of Mind” from EP001 was next. Turning out a heavier, almost Cream-like arrangement than the group’s other songs, “Out of Mind” depended the least on keyboard textures. A wash of white noise served as underpinning for the riff-heavy number. E-bows figured prominently on “Shelter” as all three guitarists used the note-sustaining device. The dreamy, evocative number highlighted the fact that while thenewno2 are certainly modern, Harrison has learned a thing or two about pop songwriting.

The stomping “Yomp” — perhaps the group’s best known song — again featured the e-bows. Harrison took the opportunity to open up a bit on lead guitar. The show closed with “Choose What You’re Watching.” Galloping drum figure gave a slightly Western-epic feel to the song, and the other musicians took the opportunity to let loose and make the song a bit of a noise-fest. In the song’s middle section, Harrison briefly soloed on stomp boxes over a ska beat. For the song’s final two minutes, the group pounded out an insistent riff that paved the way sonically for the heavy rock acts to follow.

The crowd — most of whom, presumably, were in attendance to see and hear the early 70s stylings of Wolfmother — seemed to dig thenewno2. Being third-billed onstage is often a thankless task; often the biggest applause comes when the group announces “this will be our last song.” Not true for thenewno2 in Charlotte. While a longer set would have been welcome, it’s perhaps worth noting that Harrison’s band played for 28 minutes, almost exactly the length of most of his dad’s band’s concerts from 1962-1965. The group’s set list provided a quick an overview of their first few years in existence, and delivered it up with energy and style.

Read a review of You Are Here — the debut album from thenewno2 — here.