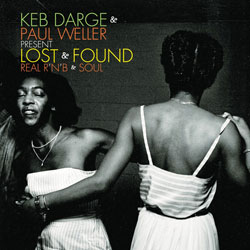 Thank goodness for crate-diggers. Were it not for the efforts of hardcore music fans — and ones possessing some considerable influence — many examples of wonderful and under-the-radar music would have been lost to the mists of time. In a manner not at all far-removed from that of legendary folklorist/ethnomusicologist Alan Lomax — he of the groundbreaking Library of Congress field recordings — modern archivists continue to rescue lost music from undeserved obscurity.

In some ways the modern trend began with Lenny Kaye‘s mega-influential Nuggets 2LP set in the early 1970s. In those grooves, Kaye turned a whole new generation on to artists and songs that had gone relatively unheralded at the time of their originals release. It may be that modern listeners might not even know of some of those tunes were it not for the original Nuggets.

Of course that compilation spawned imitators and influenced other compilers. The Pebbles series; the expanded Nuggets 4CD set and its own spawn; Fading Yellow; and may others dug deeper and deeper, unearthing treasures untold.

But the push to unearth you-shoulda-heard-this music is in no way limited to garage and psychedelia. Soul and R&B have been explored in Rhino’s excellent Blues Masters series (the Jump Blues editions, with their focus on Louis Jordan et. al, will be of particular interest to rock fans). And while it’s now hopelessly rare itself, that label’s Beg Scream and Shout 6CD box is an excellent overview of hits and undeserved misses.

Rhino and Shout! Factory are the highest profile labels leading the way in these areas, and people like Andrew Sandoval and the late Greg Shaw kept the hunt alive. But there are other collector/archivists and labels doing important work, and the fruits of their labors are not just important and artistically valid, they make for damn fine listening.

London-based BBE (“Barely Breaking Even”) Records has made a mission of compiling lost tunes. And their work concentrates on genres that haven’t seen a level of crate-digging interest on a par with garage/psych. Acclaimed Scottish dancer/DJ Keb Darge has curated a series of these with titles like Funk Spectrum III and Legendary Deep Funk Vol. 3. According to BBE, Darge’s comps have sold more than 200,000 units for the small label. His knowledge, understanding and affinity for the music of 1940 through the 70s is highly regarded.

Paul Weller is no stranger to the crate-digging scene. As a high-profile UK musician — first with the Jam, then the Style Council, and then as a solo artist, Weller has established himself as a force to be reckoned with. He has always worn his musical influences on his sleeve, and his love for soul and R&B is well known; listen to the Jam’s “Town Called Malice” single for early evidence if such is needed.

Now Darge and Weller team up, and dive into their respective collections to compile Lost & Found — Real R’n’B & Soul. The pair have hand-selected twenty-eight gems, most of which will be unfamiliar to all but the most rabid of R&B fans. Darge’s choices make up the first fifteen tracks, and Weller’s selections round out the disc.

Over the course of 28 cuts, Lost & Found surveys a wide array of R&B styles. The running order is quite idiosyncratic: one minute you’re listening to a jump-bluesy Big Mama Thornton side from the fifties. Then The Brothers of Soul let loose with a funk tune from twenty years later.

Most of these songs have shown up on other compilations, but having a collection chosen by Darge and Weller means that the listener gets an all-killer-no-filler set. Or, as Weller said of Darge’s DJing selections one night, “Not a duff tune in sight.”

It’s a safe bet that the strong hooks and licks on these original tracks have been mined by another variety of crate-digger: samplers. The opening hook on The Tempos‘ “(Countdown) Here I Come” sound uncannily like the sort of thing you’d hear on a Pizzicato Five record. And if P5 didn’t use it, they missed a great one.

Here’s the thing: those three tracks I’ve mentioned? Those are but the first three out of twenty-eight. The whole of Lost & Found — actually the second in this particular series — is every bit as good. The unearthed artists include little-known acts like Elsie Wheat, Velma Cross & Her High Steppers and Emmitt Long aside better-known artists like Slim Harpo, Bobby Bland and Tammi Terrell. And the fact that many of the acts aren’t well-known bears little or no relation to the quality of the songs. The endearingly out-of-tune horns on the propulsive “Don’t Forget to Remember” by The Great Experience actually add to the gritty authenticity of the tune. And the lower-than-low foghorn sax honks on Billy Fair & Orchestra‘s “I’ll Be True to You” foreshadow the subsonic bass lines of hip-hop.

For devotees of the Northern soul movement — an approach that eschews the mainstream stuff in favor of less-celebrated cuts — this is as essential set. But casual R&B, soul and funk fans would do well to pick this disc up as well; these songs probably aren’t in your collection, and you’ll likely discover a number of new musical directions to explore. That this high-energy dance-oriented set is but one of an ongoing series makes it even better: if you like this, there’s more from whence this came.