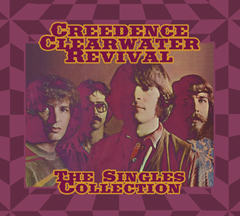 Creedence Clearwater Revival – The Singles Collection (Fantasy)
All the tracks on this 2CD set (except two inconsequential items at the end of disc 2) are presented in their original monaural mixes. One is left with the idea that the mixes are ever-so-slightly different, that they’re not merely stereo-folded-into-mono. But a quick listen proves inconclusive. Generally mono mixes put certain elements (vocals, lead guitar) further forward in the headspace; it’s safe to assume some of that is going on here. On fist listen I suspected some of the tracks appeared here in slightly sped-up versions (another common practice when mastering singles in the 60s) but some comparison put the lie to that theory. Maybe I was trying too hard.

So what do we have here? Fantasy has been mining the vaults, so to speak, recently when it comes to Creedence. In 2008 all of the albums (except the final Mardi Gras LP) were reissued, each with “deluxe” packaging, historical liner notes and a smattering of bonus tracks. (Those releases are fully discussed here). Earlier in 2009 Fantasy put out a reissue of The Concert, and followed that up with Covers the Classics, a mostly pointless (if you have the regular albums) compilation of, well, covers.

What this is, then, is something not unlike the treatment given by some European labels to 60s acts: those Singles As and Bs compilations. The Singles Collection is just that: both sides of all fourteen US singles from CCR, plus both sides of a used-to-be-rare promo single that reminds this listener of nothing so much as the Beatles‘ Christmas flexi-discs.

The sound is, ultimately, pretty fine. Even if the mixes are (or aren’t) different, it’s somehow more authentic feeling to hear these songs from the Great American Singles Band in glorious mono. And if the listener wasn’t overly familiar with CCR’s catalog, they’d be forgiven for failing at a game of spot-the-A-side. Oftentimes the b-sides were nearly every bit as good as the plug side songs. With very few exceptions, all of these songs make their point in well under four minutes. It’s interesting that the three outliers come early in the group’s career: though CCR’s music was never formulaic in execution, the group did hit on a formula of sorts. The songs are loud, immediate and forceful.

A few lesser-known tracks are included, but they can’t be called rare. For example, there’s “Call it Pretending” (almost a rock rewrite of The Four Tops‘ “I Can’t Help Myself”). Being a non-LP b-side, the song was a relative rarity until its inclusion as a bonus track on the CD version of the debut album. Here it is in mono.

The package does throw a bone in the direction of completists, however. Liner notes from the estimable Ben Fong-Torres provide some context. A bonus DVD includes four early examples of what we now know as music videos. And a cool poster depicting a wide array of international picture sleeves will remind listeners of the good old days when albums came with posters, stickers and other must-have ephemera. For fans, a limited-edition vinyl version of the set is the one to buy: it includes actual vinyl 45rpm singles in picture sleeves. For turntable owners, it’s a must-have. For the rest of those whose appreciation of CCR goes beyond the casual, this is a worthwhile purchase. But that’s probably it: unless Live in Europe gets the reissue treatment (and here’s wagering it will), all that remains is a full audio-video version of the group’s 1970 TV broadcast featuring Booker T & the MGs. Or (shudder) release of authorized versions of live concerts from the vaults, a la The Doors.