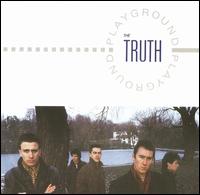 Here’s something really special. In 1985 I.R.S. records signed British quintet The Truth to a record deal. Their initial full-length is a rare example of disparate elements (in this case, soul and 80s rock) coming together to form a seamless, effective mix.

With a sound that combines the best of Northern Soul, elements of Paul Weller‘s late-period Jam aesthetic and some modern production flourishes that — for once — actually date well, The Truth turned out a ten-song LP filled with catchy, anthemic songs. The disc’s opener “Spread a Little Sunshine” has a recorded-in-a-wind-tunnel vibe to it, but that atmosphere fits the song remarkably well. The call-and-response vocal treatment is used to excellent effect. Period instruments like synthesizer, brittle guitar lines and shotgun gated-reverb drums meld well with washes of Hammond organ. The unbelievably catchy “Exception of Love” is, if anything, a stronger tune. The reverbed handclaps drag the sixties soul revival into the 80s, and it still sounds fresh today. The B3 glissandos and harmonies of “wooh” force a grin out of the listener; try not nodding your head to this one. Yearning lead vocals are supported by stacked backing vocals, and a dynamic bass line adds action to result in a timeless number. And dig that Hammond solo.

A double A-side single of these first two tracks alone would be worth the price of admission. But the remaining ten tracks on Playground keep things going. “So Many Things” edges things a bit in the powerpop direction, with more guitar and less keyboards, but the soulful harmonies — especially effective in the high register — position The Truth as something of a catchier, more soulful U2. And the song’s brief bridge is nothing short of cinematic. Dynamic variations like a stuttering drum fill only add to the depth of the song. “Always on My Mind” leans more toward a girl-group aesthetic; it’s no stretch to imagine the song being covered retroactively by a Philly soul vocal act. “I’m in Tune” updates the vibe of the Rascals‘ “Good Lovin'” for the 80s. Again, the normally-annoying gunshot snare actually works in this setting, punching through the active bass line and swirling, nimble keyboards. The bridge finds the band bringing things down, and the B3 leads them back into a double-time, stomping outro.

The title track features pounding electric piano in place of the organ; it’s another memorable tune; the stadium-sounding drumming calls to mind the best work of Australia’s Hoodoo Gurus. “Is There a Solution” weds the backing vibe of The Supremes‘ “You Can’t Hurry Love” to a modern arrangement. “Is There a Solution” slows things down briefly, mining territory close to Spandau Ballet‘s hit “True”. But it delivers a more rocking feel, replete with soaring harmonies. The track’s simple, delicate piano figures call to mind Joe Jackson‘s better songs from around the same time. The lead vocal on “Thursday Club” sounds a bit like a young (Split Enz-era) Neil Finn. The song’s guitar figure serves as a hook and countermelody to the vocal line. Delightful. The disc wraps up with “You Play With My Emotions” is the weakest track on the disc, and even it’s not without appeal; the organ solo is quite effective. It’s just that the songs weds the elements found throughout the album to a song that’s just not quite as melodically strong. So that’s nine out of ten; most albums are lucky to approach half that level of quality.

The mod aesthetic of this album is more convincing that most other efforts of the era; in fact, in places Playground out-Style Councils the Style Council, owing largely to the uptempo, high energy delivery of all the songs. A convincing argument could have been made for nearly any of Playground‘s tracks to be released as a single; the album is that strong, that consistent. But Playground didn’t even chart; I picked the LP up on its 1985 release, but nobody I knew ever heard the album unless I played it for them. None of Playground‘s songs ever made it onto commercial radio. For all intents and purposes, this first full-length effort was the Truth’s final gasp; two later albums (one even including a track ironically titled “Throwing it All Away” — were bereft of all of the wondrous qualities displayed on this disc.

This 1985 album ranks at one of the era’s great lost albums. Kudos to American Beat for rescuing another one from the depths of undeserved obscurity.