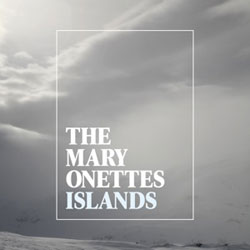 On their self-titled 2007 US debut, Sweden’s Mary Onettes put forth a modern take on the sounds of Liverpool’s Echo and the Bunnymen and Australian group the Church. Well, actually, not all that modern. Their original songs channeled the vibe of those and other groups who enjoyed a heyday in the 1980s. The lavishly packaged debut made few ripples stateside, despite a marketing push. And that’s a shame; tracks like “Pleasure Songs” and “Void” featured chiming guitars, textured harmonies, a propulsive rhythm section and wide-pan production values, all wedded to catchy, hook-laden songs.

November 2009 will see the release of Islands, another clutch of tunes from the Swedish quartet. The new disc serves up a recipe that is in many ways even more on-target than the debut. Ten tracks of forlorn, melancholy and windswept melodies populate the album. There’s a pleasingly indistinct air about the arrangement; gauzy production suits these songs. The listener may wonder: is that a guitar? Or a keyboard? Thing it, it doesn’t matter. Guitars sound like massed mandolins, or heavily reverbed twelve-strings. Remember how The Church’s “Under the Milky Way” sounds like bagpipes, whether it has any or not? Lots of that essence on Islands (and plenty of guitar figures reminiscent of that song’s opening as well).

There’s what some might call a sameness to the songs on Islands; in this case I prefer to think of it as consistency of vision. You’ll hear hints of Siouxsie and the Banshees and the Cure, and strong echoes of fellow Swedes A-ha.

Are the Mary Onettes derivative? You betcha. They’re not really adding much in the way of innovation to the musical landscape, and if you don’t enjoy the groups mentioned here, you’re not likely to discover much to love on Islands. But in 2009 you could do worse (by turning in almost any direction, in fact). It’s worth remembering that all these groups represented the interesting end of music of 20-25 years ago; The Mary Onettes draw inspiration and sound from enduring sources, and not — heaven forbid — from the likes of Journey or Bon Jovi. For fans of a certain kind of music, Islands will elicit a wide grin, and a vigorous clockwise twist of the volume knob.