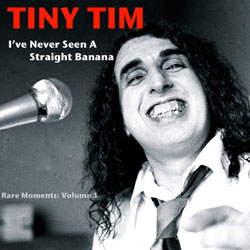 Forget whatever you think you know about Tiny Tim. His cartoonish persona distracted from the fact that he was in fact a great musical archivist, a preserver of some of America’s lost music. “Tiptoe Through the Tulips” is the beginning and end of most listeners’ musical knowledge of the man born Herbert Khaury, but there’s much more to him than that hit number. A teenage Richard Barone — years before his success leading 80s pop group the Bongos — knew of and appreciated the work of Tiny Tim. As the story goes, in 1976 Barone and two female friends traveled to the local TraveLodge motel in Tampa Florida (February 29th, as Tiny Tim documents on a tape made that day) hoping to see Tim, who was — oddly enough — scheduled to play a gig there.

The under-age trio couldn’t gain admission to the show, so they listened as best they could from the lobby. At the show’s end, the performer came through the lobby, spied the teens and asked them how they liked the show. When they explained they didn’t see it, he invited them back to his motel room for an impromptu and private performance.

Yeah, everyone to whom I’ve related this tale gives me a strange look: you mean he took those kids back to his room? Yikes. But there’s no bizarre denouement to this story. Well, maybe there is: Barone recorded the motel session. And then this teenager actually convinced Tiny Tim to let him record an album’s worth of material in a proper studio. 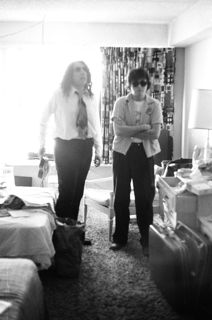 It’s those two sources — the 1980 studio session and a brief excerpt from the motel “audition” — from which I’ve Never Seen a Straight Banana is compiled. The young Barone did a stellar job of producing a clean yet audio verite document of Tiny Tim when he was still at the peak of his creative powers.

Filled with brief and oddly endearing tunes, I’ve Never Seen a Straight Banana features Tiny Tim — usually solo but occasionally backed by sympathetic violin and other instruments — pulls an assortment of long-lost ancient tunes out of his mental grab-bag. And like any good archivist, he introduces each with a brief, illuminating and offen witty and off-kilter introduction. Tiny Tim’s official biographer Justin A. Martell characterizes the man as “a performer of tremendous caliber and substance, but also a walking encyclopedia of popular songs spanning from the early 1800s to the year of his passing.” Tiny Tim regales his audience (the kids in the motel, then the kid and fellow musicians in the studio) with back-stories for each of the songs.

A natural performer on his trademark left-handed ukulele, Tiny Tim ran through his vaudeville-styled repertoire with aplomb. His stories about some of his favorite personalities — all of whom he refers to in formal terms, such as Mr. Dylan and Miss Tuesday Weld — are a delight. One comes away from hearing this album wondering if perhaps Tiny Tim wasn’t nearly as strange as he seemed. His persona was a two-edged sword: it got him noticed, but it may have also made him a novelty, kept from being taken seriously as an archivist along the lines of Alan Lomax. I mean, where else would you hear what Tiny Tim calls the “very first song that was ever recorded for the phonograph”? The story/medley “Tiny Meets Dylan” is delightful, and features Tiny Tim doing a spot-on piss-take impression of Dylan.

And as far as alleged creepiness, Tiny Tim’s cover of “When They’re Old Enough to Know Better (It’s Better to Leave Them Alone)” suggests that Eddie Cantor was something of a creep himself. Tiny Tim himself was in actuality a pretty square and traditional guy, with all that that implies. But his outsider music status belied his deep, abiding love, knowledge and understanding of the American songbook. I’ve Never Seen a Straight Banana is a heretofore unheard document of this vastly misunderstood and underrated performer.

Give this disc a try; its charms will pry your heart open. And if you like it, note that the disc’s subtitle is Rare Moments, Volume 1. Maybe there’s more to this story…?