Album Review: Lost in the Trees – All Alone in an Empty House 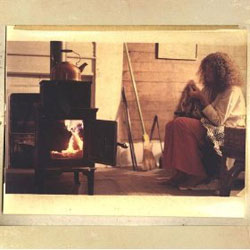 I absolutely love vinyl. And I’m no audiophile; my hearing is quite damaged from thirty-plus years of playing in bands (and seeing the Who in 1980). I dearly value the warmth of the vinyl; that digital stuff is harsh on my ears (man). And I don’t mind the crackle of dirt and dust in the grooves even a bit.

So when I heard that All Alone in an Empty House, the latest by Chapel Hill NC-based Lost in the Trees, was available on vinyl, I jumped at the chance to review the album. It arrived in one of those boxes familiar to former members of the Columbia House Record Club, and upon opening it I discovered that the band and/or label had covered all — and I do mean all — of the bases. Included alongside the black slab of vinyl was a CD and a slip of paper. That paper held instructions for downloading a 320kbps (that’s high quality) MP3 version of the album. Very impressive, that. Me, I’ll go with the vinyl.

But what of the music?

It’s a bit precious, but in a good way. Think of Sufjan Stevens or any number of the Elephant 6 Collective bands with (much) more classical instrumentation (harpsichord, real strings etc.) and you’re on the right track. Like Stevens’ songs, the music on this LP reveals more of itself upon repeated listens. The third track, “Mvt. I Sketch” is an achingly beautiful instrumental, but all of the songs have their charms.

Largely acoustic based, the album manages to avoid the singer/songwriter curse of dullness. Yet, there’s very little of the Syd Barrett weirdness; based in American folk and European classical forms, the disc manages to trade that middle ground, and it’s all the better for it.

I missed an opportunity to catch this band live, and I do regret it. Within the confines of a small venue (a coffee house or art bar, I’d think) I imagine these songs would have gone over quite well.

The second side — hey; I’m listening to the vinyl! — kicks off with a good bit more oomph, including an electric guitar riff and some strings that seem to be trying to snag a Mellotron vibe — and it’s got me thinking that All Alone in an Empty House is sequenced to follow the dynamics of a live show. Start calmly, draw the audience into your world, and then knock ’em on the head. It’s a winning formula, and it certainly works here. I found myself filled with anticipation at the fadeout of each song: where are they gonna go next?

Side two’s “Love on My Side” is essentially a sing-along. Phil Ochs-style guitar chords and subtle harmonies build the tune, grabbing the listener in an aural equivalent of a dancer grabbing you by the arm: “Come on, let’s dance!” Delightful stuff. There’s an intimate vibe that permeates all of All Alone in an Empty House, and it’s a vibe that’s increasingly rare these days.

Without a doubt, Ari Picker’s vocals are the sort you’ll either love or hate. And normally I’d have both feet firmly planted in the latter category. But there’s something about his earnest, delicate delivery — and the fragility of the arrangements — that pulls me deeper and deeper into the music. This is not the sort of thing I’d normally dig, but this is the sort of music that almost brings a tear to the eye. Did I mention that much of it is achingly beautiful? Yeah, I did. It’s worth mentioning twice. So there.

Even if acoustic chamber-pop isn’t your bag, I urge you to give this a try. You never know. I didn’t, and now I do.

This LP from Lost in the Trees now occupies a well-earned spot in my vinyl collection between Los Lobos’ La Pistola Y El Corazon and Love Tractor’s This Ain’t No Outerspace Ship.