Here’s one from the archives. In fall 2006 — not that long ago — I interviewed the son of John Lennon and Yoko Ono for Skope Magazine, a (now-defunct) national print magazine where I worked a couple years as Editor in Chief. I was lucky enough to see Sean onstage not long thereafter; I was, frankly, amazed at how good the performance was. The songs — mostly from his then-current release Friendly Fire — are tuneful pieces, but they don’t exactly rawk.  But live onstage, Sean and band did exactly that. He’s a fine lead guitarist, too. Currently (fall 2009) he’s on tour with Mom in a band called (appropriately enough) Yoko Ono Plastic Ono Band. Today – 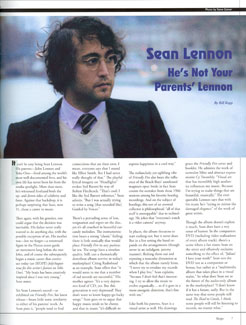 – on the 69th(!) anniversary of his father’s birth — Sean celebrates his own 34th birthday. Enjoy…

It can’t be easy being Sean Lennon. His parents — John Lennon and Yoko Ono — lived among the world’s most well-documented lives, and his own life has never been far from the media spotlight. More than most, he’s witnessed firsthand both the up- and down sides of celebrity and fame. Against that backdrop, it is perhaps surprising that Sean, now 31, chose a career in music.Then again, with his genetics, one could argue that the decision was inevitable. His father never really wanted to do anything else, with the possible exception of art. His mother was–lest we forget–a renowned figure in the Fluxus avant-garde art movement long before she met John, and of course she subsequently began a music career that continues today (read my feature on Yoko Ono). “My brain has been creatively inspired since I was very young,” Sean states.Yet Sean Lennon’s sound — as exhibited on Friendly Fire, his latest release — bears little sonic similarity to either of his parents’ work. As Sean puts it, “people tend to find connections that are their own. I mean, everyone says that I sound like Elliot Smith. But I had never really thought of that.” The playful lyrical imagery on “Headlights” evokes Syd Barrett by way of Robyn Hitchcock. “That’s cool; I like the Syd Barrett reference,” Sean admits. “But I was actually trying to write a song [that sounded like] Guided by Voices.”

There’s a pervading sense of loss, resignation and regret on the disc, yet it’s all couched in beautiful ear-candy melodies. The instrumentation bears a strong “classic” feeling; there is little sonically that would place Friendly Fire in any particular era. The songs have a timeless quality. Still, can a thematically downbeat album survive in today’s marketplace? Citing Radiohead as an example, Sean offers that “it would seem to me that a number of sad records are successful.” His mother agrees: “It’s a very depressive kind of CD, yes. But this generation is very depressed! They don’t want to know happy-go-lucky songs.” Sean goes on to argue that happy music tends to be cheesy, and that in music “it’s difficult to express happiness in a cool way.” The melancholy-yet-uplifting vibe of Friendly Fire also bears the influence of the Beach Boys‘ unreleased magnum opus SMiLE; in fact Sean counts the outtakes from those 1966 sessions among his favorite bootleg recordings. And on the subject of bootlegs, this son of an avowed collector is philosophical: “all of that stuff is unstoppable” due to technology. He jokes that “everyone’s watch is a video camera” anyway.

In places, the album threatens to start rocking out, but it never does. But in a live setting the band expands on the arrangements (though never in an indulgent, jammy manner), fleshing them out and exposing a muscular dimension at which that the album merely hints. “I never try to emulate my records when I play live,” Sean explains, “because I don’t feel that’s interesting. I try to allow the music to evolve organically…so if it goes in a more energetic direction, that’s fine with me.”

Like both his parents, Sean is a visual artist as well. His drawings grace the Friendly Fire cover and booklet. He admires the work of surrealist Miró and abstract expressionist Cy Twombly. “Visual art that has incredibly high aesthetics influences my music. Because I’m trying to make things that are beautiful, musically.” The ever-quotable Lennon says that with his music he’s “trying to mirror the damaged elegance” of the work of great artists.

Though the album doesn’t explore it much, Sean does have a wry sense of humor. In the companion DVD (including video realizations of every album track), there’s a scene where a fan meets Sean on the street and effusively exclaims something to the effect of, “Julian! I love your work!” Sean sees the DVD not as a companion or bonus, but rather as a “multimedia album that takes place in a visual realm.” So what does Sean see as the future of the audio-only album in the marketplace? “I don’t know if it has a future, sadly. But in the same way that some people still read The Iliad in Greek, I think some people will still be listening to records, no matter what.”