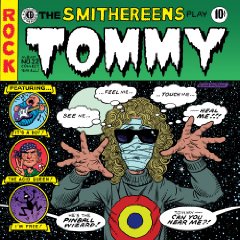 The Smithereens are well-known rock fans. Their unique, canny take on rock music is informed by everyone from the Four Freshmen (drummer Dennis Diken cites them as a large-looming influence) to Black Sabbath (guitarist Pat DiNizio wrote a tribute of sort to Iommi and Co. on the first ‘Reens LP). And their affection for rock giants like the Beatles and the Who was well-known long before they covered those groups on record. So after establishing a consistent and deep back catalogue, the group took a (forgive the Who pun) detour into cover-tribute territory in the 00’s.

There is in fact a proud tradition of established rock musicians covering the work of others. The Hollies and Byrds did Dylan. Wilco did it with the work of Woody Guthrie. And the pride of Carteret NJ, — The Smithereens — have established something of a cottage industry with three of their last six albums. After two Beatles-centered albums (Meet the Smithereens and B-Sides the Beatles) the quartet returned in 2009 with The Smithereens Play Tommy.

The Smithereens 2009 release reinterprets the classic album, and in fact improves on it in a number of ways. First, the ‘Reens strip away the album’s lesser tracks. Doing so doesn’t make for a jarring “story line,” seeing as the original wasn’t all that lucid a narrative to start with. Second, the Smithereens answer the question posed in Bill Crowley’s liner notes: “What if the Live at Leeds or Who’s Next [era] Who had recorded a proper, all-out rock studio version of Tommy‘s best songs?”

As Smithereens’ Pat DiNizio told the audience at the 2009 Charlotte Pop Fest, the idea for this project came mostly from guitarist Jim Babjak and drummer Dennis Diken. It’s mostly their project, he says, meaning that in the best possible sense.

Rolling Stone famously wrote that bassist John Entwistle had the misfortune to be a very good songwriter in a group with a great one. With respect to vocal duties, a similar argument can be made concerning both guitarist Jim Babjak and drummer Dennis Diken. Babjak’s voice, especially on “Amazing Journey”, is ideally suited to the material. Freed from the all-originals format, the Smithereens turn in a more vocally democratic performance: all three original members take multiple turns in the lead vocal spotlight, selecting the songs that best suit their ranges and styles.

The Smithereens “new” bassist Severio Jornacion (“The Thrilla” joined in 2006 after original bassist Mike Mesaros retired) ably channels the high-energy punch of Entwistle’s bass lines, yet there is enough subtle reworking of the songs — a turnaround where there wasn’t one before, a new percussion accent, some interesting chord shadings — to keep Tommy far out of Whomania territory. The band sinks their musical teeth into the material; Diken seems to relish the opportunity to crash into the songs with controlled abandon, and Babjak cuts loose, bringing forth the feeling of Townshend’s slashing windmill-filled playing without aping his style. And production by DiNizio, Diken, Babjak and Kurt Reil (The Grip Weeds) ably bests the original album’s thin tone, bringing out the oomph that was missing from the — it must be said — slightly effete two-LP set.

The band takes the most liberties with “Sparks”. One’s stereo needs to be cranked as loud as possible to fully enjoy the Smithereens on this track. And The Smithereens rescue “Sensation” from obscurity; that song — bearing the most in common with the high-energy work of the mid 60s’ Who — is delivered here with the deft mixing of punch and subtlety that informs Diken’s solo album of original (yet often Who-influenced) material. The Smithereens Play Tommy isn’t meant to replace your well-worn copy of the Who album, and it shouldn’t. But this loving and energetic tribute does serve as an enjoyable rethinking of that set. The Smithereens are well suited to the challenge of covering an iconic work without losing their own identity in the process.

The selection of William Stout to design the cover art is a nod to hardcore Who fanatics and bootleg collectors; those people will recognize Stout’s work from the Tales of the Who bootleg. The comic-book themed artwork makes for a cool cover, and throws a knowing wink in the direction of those hardcore fans, as if to remind them (us), “hey: we’re with ya.” and indeed the Smithereens — who remain every bit as vital in concert in 2009 as twenty-five years ago — are.