In the Warm Embrace of Ozric Tentacles

One of the most memorable lines in John Landis‘ film The Blues Brothers takes place when the band arrives at a roadhouse. Elwood Blues (Dan Aykroyd) asks the proprietress, “What kind of music do you usually have here?” She comes right back with her reply: “Oh, we got both kinds. We got country and western.” The punch line is funny, of course, because “we” (the non-C&W fans) “know” that country and western is one thing, that there’s no difference between the two.

And so it is with other forms as well. To non-aficionados, progressive rock, jam-band music, psychedelic…they’re all the same thing, pretty much. But within that world, adherents see and hear sharp divides between the styles. If I might engage in a bit of stereotyping, prog fans are often (but of course not exclusively) middle-aged white males who follow the intricacies of the music closely and ponderously. You might see them pump their fists and/or clap effusively at a song’s end, but they’ll stand as if their feet are nailed to the floor. 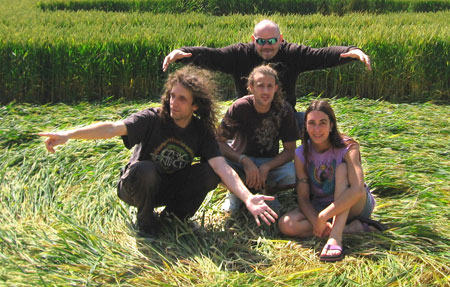 Jam band fans, of course, are another kettle of fish, and a patchouli-scented one at that. They absorb the music into their very beings, and express their joy and communal oneness with the band by closing their eyes, tilting their head heavenward, and spinning into (or while in) oblivion. They engage in what the Polyphonic Spree‘s leader Tim DeLaughter told me he calls “noodle dancing.”

Rarely do the twain of prog fans and noodle dancers meet.

Doubtless this head-vs.-heart aesthetic is a simplification, but grains of truth remain. It takes a truly special sort of band to bridge the gap, to provide something musical and beyond that can satisfy, reach, speak to these disparate camps.

As I discovered a few days ago, Ozric Tentacles is such a band.

My own discovery of this band came quite late in the game. I’m an avid user of Pandora, the “music genome project” application that “learns” the listener’s musical tastes based on their thumbs-up or -down rating of songs. Say you — as I did — choose a “station” based on the music of Porcupine Tree. First Pandora serves up one of the tracks from that prog group’s extensive catalog. Yes, I like it; no surprise there.

But then — based on an algorithm of literally hundreds of variables ranging from tonal quality to instrumentation to vocal style — Pandora streams another track it “thinks” I might like. Something, perhaps by Swedish death metal band Opeth. But unless it’s a track off their melodic and primarily acoustic-based Damnation album, I give the aggressive track a quick thumbs-down mere seconds into the song. So away it goes, and Pandora makes a note, so to speak, of my preference. That process continues, and if I take the brief second to rate each track as it plays, Pandora quickly develops a play list of songs that have the qualities that I (consciously or not) like in Porcupine Tree’s music. Through this process I — along with many other Pandora users — discover acts I would otherwise not know about.

Enter Ozric Tentacles. This instrumental band has, as it turns out, nearly two dozen albums in their back catalogue. With virtually no assistance from a major label, the Ozrics (as they’re affectionately known) have built a cottage industry, shifting over a million units in the process. They’ve developed into a perennial fixture on the festival circuit, and their mix of prog, psych and jam-band aesthetics has won them fans across the musical spectrum.

Describing the Ozrics’ music to the uninitiated is no easy task. While it makes use of a fairly straightforward guitar-bass-drum-keys lineup, the group employs a wide array of samples, sequences and arpeggiated effects in their songs. And while their songs are generally tightly constructed affairs with things like hooks and melodies, ample space is built in for sonic excursions in to the ether. A ferocious guitar attack is leavened by spacey keyboards. Complex time signatures and compositional left-turns are broken by jam sections.

And the jam sections are rarely noodling of the aimless variety; the players always seem to knowwhere they’re going in a song. With just the right amount of improvisatory space, an Ozric Tentacles jam might combine elements that wouldn’t (on paper) seem to go together. A reggae-influenced backbeat underpins a synthesizer solo. A complicated riff serves as the bed for a soaring guitar solo full of hyper-sustained notes. It’s a bit like a musical version of those Food Network shows where they ask chefs to concoct something out of avocados, peanut butter, goat cheese, curry and…chorizo. Or something like that. And like a select few of those chefs, Ozric Tentacles manages to serve up a tasty meal indeed.

Their music samples liberally from genres. Over the course of an Ozrics concert, one is likely to hear numerous musical references to Eastern styles — aural images of Morocco, Cheops, Mumbai and Phu Ket danced in this listener’s head. And while the group comes at things from a rockist standpoint — these men (and woman) are no Kitaro, thank goodness — the nearest musical touchstone I could conjure up was the mid 70s work of Jean-Luc Ponty. At times guitarist Ed Wynne’s fretwork called to mind guitarist Stewart Copeland’s work with The Police. Yet those comparisons only hint at tiny fractions of the Ozrics’ style, one that is, in the end, decidedly their own.

Onstage at Asheville’s celebrated Orange Peel, the Ozrics — mainstay and leader Ed Wynne on guitar and synths (often in the same song); wife Brandi Wynne on bass; Silas Wynne (Ed’s son) on keyboard, sequencers and samples; and Oliver Seagle on drums — played for well over two hours to a respectably-sized audience. Ed spoke to the audience a few times. The wordless Oliver and Silas busied themselves with stickwork and knob-twiddling, respectively. This is one band that prefers to let the music do the talking. Brandi Wynne handled what there was of overt audience interaction. She introduced Ed as “Shreddy Eddie” and made note that ton the group’s first Orange Peel date a few years earlier, they played in front of “like, twelve people.” She asked for a show of hands from anyone presently in attendance that had seen that show; about twelve hands went up. “See?” she joked. At one point during a longish number called “The Throbbe” Brandi put down her bass, left the stage, and made her way through the crowd to hi-five the Orange Peel’s back-of-house sound engineers for a swell job; on her return trip she took a few minutes to dance with the concertgoers.

Before the show began, I made a point of watching the concertgoers as they trickled in. A very balanced population of those middle-aged progsters and the younger hippie (and faux-hippie) types staked out their places. I wondered if one or the other group would leave unsatisfied, but the Ozrics delivered in a big way. I think I saw a few hippies actually thinking about the music, and I’d swear one of the prog fans was actually swaying back and forth, almost imperceptibly.

The latest release from Ozric Tentacles is 2009’s fine The Yumyum Tree, but the best taste of the Ozrics’ dynamic stage show is the 2008 CD+DVD release Sunrise Festival. Both are available from the band’s web site www.ozrics.com. If they come to your town, check them out; you won’t be disappointed.