Imagine you’re driving a lonely strip of highway late at night. You’re behind the wheel, and for whatever reason — maybe it’s a rental car, I dunno — you don’t have a CD player or an MP3 dock. So you turn on the radio. And what you discover is the coolest soul station on the FM dial. All it plays are songs that seem oddly familiar and friendly, even though you’ve heard very few of the tunes before. The DJ — who has the power to choose the songs (look, this is a fantasy, ok?) and the taste to shut up and let the music play — has a theme for this late night: duets. The songs roll on, one after the other, and every one’s a winner. 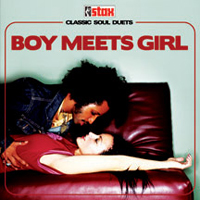 Now come back to reality. But while reality might not look like this dream, it can sound the same. Just pop in the (sort of) new Stax compilation Boy Meets Girl. Eighteen classic soul duets from the Stax vaults — some rare, some well-known, all excellent — populate this disc. The roster is a veritable who’s who of Stax artists: the male vocalists include William Bell, Eddie Floyd, Johnnie Taylor; the females are represented by no less than Mavis Staples and Carla Thomas.

At least three songs will be familiar to rock fans, but not in these versions. William Bell and Mavis Staples crank out the funk-soul on “I Thank You” and rescue the song from its inferior ZZ Top cover version. Eddie Floyd and Mavis Staples turn in a straightforward (and romantic) reading of “Piece of My Heart,” made famous by Janis Joplin. And Eddie Floyd with Cleotha Staples reinvent Chuck Willis‘ “It’s Too Late” (covered by Derek & the Dominos) into a lovely, heartfelt duet.

The arrangements are superior throughout. While it’s not explicitly stated, the subtle yet commanding hand of Isaac Hayes is almost certainly at work on some of the arrangements (he is credited as co-producer on the Johnnie Taylor – Carla Thomas version of “My Life”). Much of the production work is handled by the estimable Steve Cropper or Booker T. Jones. The subtle and very tasty horns on “Ain’t That Good” featuring Eddie Floyd and Mavis Staples virtually drag the listener onto the dance floor. William Bell and Carla Thomas hold forth on a deeply romantic reinterpretation of the Everly Brothers‘ “All I Have to Do is Dream.”

A couple of unusual choices round out the disc: “My Baby Specializes” is a rare example of blue-eyed vocal soul from Stax, featuring the talents of Delaney & Bonnie. How could you go wrong with them, especially if you add help from Booker T & the MGs, Isaac Hayes (the song’s composer) and William Bell? “It’s Unbelievable (How You Control My Soul)” — led by Pervis Staples and Carla Thomas — has a vibe halfway between Dusty Springfield and Aretha Franklin. And speaking of Dusty, the disc includes a bonus track (from the 80s, but you’d know that if you heard it) featuring Ms. Springfield in a duet with Spencer Davis, covering “Private Number.” It suffers fatally in comparison to the William Bell – Judy Clay version that kicks off the disc, but it’s a nice artifact.

Boy Meets Girl was originally released by Stax as part of an effort to rush-release as much material as they could, but the album bears not a whiff of cash-in (and apparently, it was released to market indifference). While Concord/Stax stays busy in the 21st century putting together new compilations, the decision to release this (expanded) reissue is welcome.

This disc is a gem, and it’s easy to sink into its vibe. But keep your eyes on the road.