Good music is always more than the sum of its parts. Let’s say you’re interested in making a pop record. And by pop, here I mean pop in its classic sixties sense (hell, I mean most things in their classic sixties sense, but stay with me here). Let’s say, too, that you have enough cred in the biz that you own a Rolodex full of some of the genre’s finest artists.

You phone up powerpop wunderkind Jason Falkner and ask him if he doesn’t mind laying down some lead guitar on one track, some bass on another. You contact the guys in the Wondermints–a great group on their own, but perhaps best known now as Brian Wilson‘s backing group for his triumphant Pet Sounds Live and SMiLE projects–and solicit their playing talents on several tracks. And since you’ve got Brian Wilson on the brain, you reach out to Andy Paley, producer of ‘s first solo LP (and of another unreleased Brian Wilson project) for his talents on vocals and a wide assortment of instrumentation. And then you push the Beach Boys/Wilson concept even further: you get in touch with The Honeys, the Wilson-produced vocal trio that includes Brian’s first wife Marilyn (mom to Wendy and Carnie of Wilson Phillips, but there I go digressing again). And since you’re a such fan of sixties pop culture, you enlist the help of Andrew Sandoval, famed producer of reissue projects and author of a charming book about The Monkees. 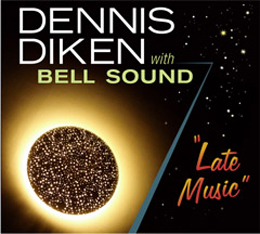 OK, so does all that guarantee you a quality product? Certainly not.

But if you’re Dennis Diken, drummer for the Smithereens, session drummer and noted pop culture author and expert, you add your own talents to the sonic stew, and you collaborate most closely with another multi-instrumentalist, Pete DiBella, on production, arrangement and songwriting. In fact, it’s that last item–songwriting–where you put the most effort. You write a clutch of original songs that evoke the spirit of pop and rock acts that tastemakers revere. Sure, the most obvious touchstone is there: Boys. How could it not be, with all those people on board? Well, if the songs weren’t up to snuff, no amount of poured-on talent could save them.

But there are plenty of other sonic nods on Late Music, the first album credited to Dennis Diken with Bell Sound. It doesn’t require an advanced degree in sixties musicology to hear strong echoes of the Who, the Move, and other punchy British acts throughout Late Music‘s baker’s dozen of tunes. Strong, chiming guitar-driven tunes with clever little musical turns populate this disc.

The leadoff track “The Sun’s Gonna Shine in the Morning” throws elements of “I Can See for Miles” and “(I’m Not Your) Stepping Stone” into a blender and whips up a frothy new concoction guaranteed to please fans of any of the acts mentioned herein. “Standing in Line” turns out the unmistakable Beach Boys vibe, but since it’s the mid-period BB vibe–with its emphasis on wall-of-sound instrumentation–all is well. “Long Lonely Ride” evokes the Who again, and shows Diken’s penchant for inside jokes: the pilled-up piano mixed into the track sounds right out of the Who’s early sessions with Shel Talmy at the desk.

And the album maintains that level of quality throughout. Diken and his collaborators manage the tricky feat of making music that feels timeless: though there’s the clear debt to rock’s lineage, the songs have a modern feel to them; this is most true on “I’ve Been Away,” but it’s true of many of the album’s tracks. Even the dated-sounding ones (like the delicate, unadorned “Lost Bird”, which sounds like an unused Pet Sounds demo) are a delight. And the complex creation that is “The Bad Merry-Go-Round” sounds like a lost cousin to Sgt. Pepper’s “Being for the Benefit of Mr. Kite.” And there’s a pleasingly odd sound on “Don’t Let Me Sleep Too Long” that sounds like a clavioline (see “Baby You’re a Rich Man” or “Telstar”), but isn’t.

A near-perfect blend of sweet and strong, Late Music is a tasty treat indeed. Catchy songs filled with hooks for most people (and subtle musical references for we obsessives) come together to create a supremely enjoyable album. And of course Diken’s drumming is top-notch throughout, giving the pop songs a good kick in the ass all the way through.

As original as a project informed by these sensibilities could possibly be, Late Music by Dennis Diken with Bell Sound deserves a wide hearing. Here’s hoping the disc’s success convinces Diken to continue down this musically fruitful path.