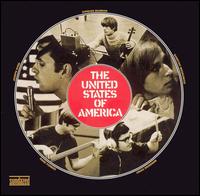 It’s easy to forget that in 1968, getting weird and unearthly sounds on your album (assuming you wanted them; plenty did) was no easy task. There were no presets, no samples; if you wanted the whooping effect of a ring modulator, you had to find one, and then figure out how to operate the damn thing.

The only record released by The United States of America employed that, and much more. USA made for challenging listening in ’68, and it still does today. The album occupies that odd musical space between conservatory recital and soundtrack to a (bad?) acid trip. Don’t let that scare you away, or you’ll miss something grand.

The album kicks off with “The American Metaphysical Circus,” sounding like a gang of wooden flute-playing hippies colliding with a Fourth of July marching band. “Hard Coming Love” is a conventional song in the 1968 freakout mode, not unlike the background music you might hear on a vintage episode of Mannix. “The Garden of Earthly Delights” puts electronics to the task of sounding organic, and succeeds. Every song on the record is remarkable in its own way.

The United States of America sounds like little else in your collection; it pushes the boundaries of song and sound. With its amazingly faithful reproduction of the original packaging, the recent Sundazed reissue on vinyl is warmer than earlier CD releases, but then you probably knew I’d say that.