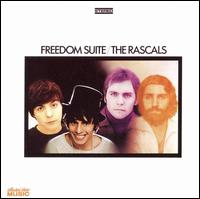 The (Young) Rascals released nine albums during their career (1966-1972). All but the last two were on Atlantic, and have now been licensed for re-release. The first four albums (which cover their “blue-eyed soul” phase) now include both the stereo and mono mixes. Their later albums — beginning with 1969’s Freedom Suite — chart their musical expansion and assimilation of other influences (and sadly, their commercial decline). All are worthwhile-to-essential, but if you have to buy only one, get the 1966 debut. What? You can afford two? Give some belated appreciation to the creative adventurousness of Felix Cavaliere and Co. and pick up Freedom Suite, original home of the amazing, groundbreaking, soul-stirring hit “People Got to Be Free.”