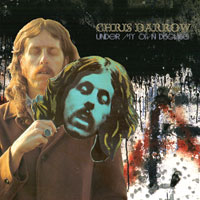 In 1967 a west coast based group calling itself Kaleidoscope (no relation to the UK psych group of the same era) released their first album, Side Trips. That album is now thought of as something of an overlooked gem from the psychedelic era. But in retrospect it’s clear that the group’s music was proto-world music, though the world music label wasn’t in use in those days. With a sound one could tie fairly directly to the approach of 80s/90s underground sensations Camper Van Beethoven, Kaleidoscope eventually released four albums on an unsuspecting (and largely indifferent) marketplace before splintering. Critics took notice (especially in later years) but during their relatively brief time in the (dim) spotlight, Kaleidoscope made few noticeable waves.

The group’s highest profile member was David Lindley. Nominally a guitarist, Lindley was drawn to more exotic stringed instruments, and the Middle Eastern flavor of some of the group’s songs owes its character in large part to Lindley’s influence. Lindley went on to some degree of solo success (especially on 1981’s El Rayo X album) and is perhaps best known for his guitar work on a number of Jackson Browne albums. Lindley’s slide guitar work on “Running on Empty” is distinctive and memorable.

But Lindley wasn’t the only important and noteworthy member of Kaleidoscope. Another multi-instrumentalist was Chris Darrow. He too was intrigued by foreign sounds and textures, but Darrow also has a strong grounding in what is now called Americana. The melding of these two acoustic forms (both are, of course, umbrella terms for a wide variety of styles) resulted in a set of influences that informed all of Darrow’s songwriting and performing. Darrow served in Kaleidoscope a role similar to that of Gram Parsons in the Byrds, bringing country influences to bear on the group’s music, informing it in a variety of ways, sometimes overtly, sometimes more subtly.

Darrow left Kaleidescope after that group’s high water mark, 1968’s A Beacon From Mars. He spent a few years in the Nitty Gritty Dirt Band and did some sideman work. In the early 70s he released his first two solo albums — Chris Darrow (1973) and Under My Own Disguise (1974). Both were filled with his trademark eclecticism, and both went out of print fairly quickly.

In 2009 Everloving reissued the albums in a box containing a book, two LPs and two (redundant) CDs. This very expensive boutique release hopes to expose Darrow’s early solo work to fans who (perhaps) have the advantage of a wider set of musical references upon which to draw (said listeners are also required to possess a good bit of disposable income). Listeners who have heard and enjoyed the music on the O Brother, Where Art Thou? soundtrack would doubtless appreciate Darrow’s music more than would, say, a typical rock fan of 1974.

That said, this isn’t all narrow-market stuff, not at all. The first album’s opener, “Albuquerque Rainbow” is good-time midtempo country rock, something like a cross between early Eagles and Allman Brothers. Fiddles and other non-rock instruments do abound, and are generally used to good effect. The songs subtly employ a grab-bag of influences: “Take Good Care of Yourself” mixes a vaguely Caribbean feel with Appalachian fiddle backing. “Don’t Let Your Deal Go Down” is heavy on the fiddle work, with a snare drum straight out of the Scottish Highlands, yet the song effectively weaves electric guitar into the mix. The result sounds a bit like what Jerry Garcia might have been aiming for on his own solo albums.

The album continues much in that vein. “Devil’s Dream” is an instrumental number built around mandolins. Listeners will hear acoustic guitar, harpsichord, cello, dobro, banjo, recorder and hammered dulcimer in addition to (much less frequently) rock instruments. Overall the mood is serious and somber, but tracks like “We’re Living on $15 a Week” lighten the mood. On that and other numbers, Darrow’s vocal style leans heavily in the Appalachian direction. “To Which Cross Do I Cling” sounds a bit like late-period Moby Grape, but with a languid lack of energy (i.e. stoner vibe) familiar to Grateful Dead fans. A cover of Hoagy Carmichael’s “Hong Kong Blues” showcases Darrow on piano. The album’s closer, “That’s What It’s like to Be Alone” sounds like a cross between Kaleidoscope and…very early Electric Light Orchestra. Finally, the album moves in so many styles — most uncommercial ones — that it’s not difficult to see why this record didn’t shift many units in the 70s. Worthwhile for the adventurous, Chris Darrow is perhaps too strange for casual fans of rock or Americana.

A mere year later Darrow returned with Under My Own Disguise. The second album is very much a companion to the first, and traffics in the same wide-screen musical approach. The disc opens with “Miss Pauline,” an upbeat tune with commercial instincts, but the fiddles are quite prominent, all but guaranteeing a scaring-off of 1974-era rock fans. “Living Like a Fool” is built around the then-popular Nashville school of arranging: pedal steel guitar and Floyd Cramer-style piano. A looser-than-Nashville vibe offsets the instrumentation, resulting in a successful song. With its jazzy acoustic guitar, swingin’ fiddle and saucy lyrics, “Java Jive” would sound right at home on Garrison Keillor’s A Prairie Home Companion radio show; as the last chord fades, one half-expects to hear Keillor’s corduroy voice emceeing over enthusiastic (but seated) applause. “Another Sundown” wouldn’t sound out of place on an early Jimmy Buffett LP.

Taken as a whole, the energy level on Under My Own Disguise is a notch or two below that of the debut album, but the disc has plenty of charms. Darrow’s voice is well-suited for the songs, but it’s not the most expressive instrument in Darrow’s arsenal. Harmonica, accordion…it’s hard to think of an acoustic instrument that doesn’t make an appearance on one or both of these albums. And the album closes with “Old Scratch,” a tune that successfully manages to throw everything in: there’s a good bit of analog synthesizer on the song, and it fits perfectly alongside pennywhistle and fiddle. Go figure.

Perhaps tellingly, the world music influence of the Kaleidoscope era is all but absent from both of these releases. Yet a few years later Darrow would take part in a Kaleidoscope reunion, releasing two albums that again fused the disparate stylings of Appalachia and the Euphrates valley.