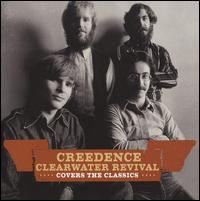 There’s something to be said for conceptual/thematic repackaging of selections from a music artist’s catalog. Hell, even 1970s cash-in packages like The Beatles’ Love Songs and Rock and Roll made some sense, even though they removed the songs therein from their intended contexts.

Creedence Clearwater Revival is often referred to as the Great American Singles Band. And they were, too, but their albums are cohesive works, best enjoyed start to finish. All (except the not-as-bad-as-its-reputation-suggests swan song Mardi Gras) were reissued in 2008 with bonus tracks and thoughtful annotation. And Fantasy/Concord has also re-released the excellent live album The Concert.

But then there’s this: Creedence Clearwater Revival Covers the Classics. Yes, CCR did a great job of breathing new life into early rock and roll (and folk, and blues) numbers, making the songs their own by applying their own unique spin on the Booker T & the MGs approach. And those covers (like Screamin’ Jay Hawkins’ “I Put a Spell On You”, Dale (no relation!) Hawkins’ “Susie Q” and Ricky Nelson’s “Hello Mary Lou”) are consistently ace. But tossing the dozen songs CCR covered onto a single disc doesn’t reveal much to the listener about the band, other than the fact that they were good at choosing and executing covers. But so is my band (in fact that’s all we do). Big deal.

If you have all the CCR albums (and if you love rock and roll, then you really should) you have no real need for this set. Unlike the reissues, there’s no insightful essay inside. If you don’t have the original albums, you should get them. If you don’t want them, you don’t want this. And if you’re just getting introduced to Creedence, this isn’t the place to start.

Is the music good? Certainly. But the repackaging is as pointless as if Fantasy had compiled a Creedence Sings About Places set and put on “Lodi”, “Green River”, “Born on the Bayou”, and so on.

Come to think of it, that wouldn’t make a bad mixtape. Which, alas, is essentially what Creedence Clearwater Revival Covers the Classics is.