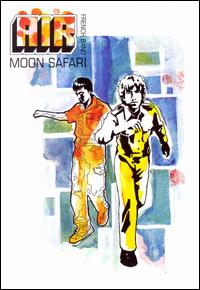 At the very tail-end of the 20th century, Air — the duo of Nicolas Godin and Jean-Benoît Dunckel — released their debut, Moon Safari. Their blend of dance, exotica, rock and atmospheric(!) arrangements was innovative in ’98, and sounds every bit as fresh today, on this, the Moon Safari 10th Anniversary Edition.

Moon Safari isn’t all Moogs and vocoders; the disc is awash in “real” instruments, and the vocals — provided by a cast of guest stars, setting the template for later groups like Zero 7 — serve as an instrument themselves.

Two bonus discs add to the value of the 10th Anniversary reissue. The remixes are more thoughtful than the standard throw-some-drum-samples-on-it approach, and the live cuts — especially the surprising live “Kelly Watch the Stars” shows that Air could (and did) rock out onstage when they wanted to. The DVD disc includes the long-out-of-print documentary about the group, Eating, Sleeping, Waiting & Playing plus four music videos and a few other goodies.