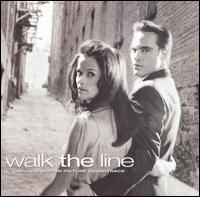 Val Kilmer would be proud. The nearest, best antecedent to the soundtrack to the 2005 Johnny Cash biopic Walk The Line is Kilmer’s vocal turn in Oliver Stone’s The Doors. In the Cash film, the decision was made to use new recordings of old classics, rather than having actors lip-synch to other recordings (presumably robbing Ashlee Simpson of her chance to co-star as June Carter Cash).

Paradoxically, the approach lends an air of authenticity to the proceedings. Neither Joaquin Phoenix (Johnny) and Reese Witherspoon (June) apes their subjects; instead they work to capture their feel, their essence. Arguably they nailed it.

Throughout the disc — though most notably on Witherspoon’s “Juke Box Blues,” Phoenix’s opener “Get Rhythm” and the rollicking “Jackson” duet — the musical spirit of Americana is faithfully evoked. In spots, the vocalists sound slightly winded; this merely adds to the charm and “authenticity” of the renditions.

Credit is due as well to T-Bone Burnett an old hand at this sort of thing (The O Brother Where Art Thou? soundtrack, Spinal Tap) for his pastiche approach to production values. No overt attempt is made to “update” the songs or soften their edges for contemporary audiences.

In sum, Walk The Line is quite successful for what it is, and (perhaps most importantly from an artistic angle) likely to encourage a generation of new fans to seek out the original recordings. For an extra credit assignment they should find out why Johnny Cash, this most American of artists, wore black.