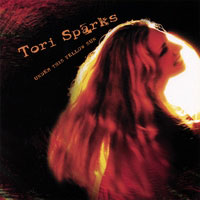 A singer/songwriter with a guitar, Tori Sparks manages to avoid the misstep of sounding like every other coffeehouse-circuit singer. Her tight songwriting and playing, coupled with interesting arrangements and high production values make Under This Yellow Sun a contender for mainstream success.

Pedal steel and trumpet are but two of the instruments that add color to the album’s twelve tracks. The instrumentation never feels gratuitous, though; it always serves the needs and goals of the song at hand. The slinky opener, “Cold War” is more upbeat than the title might suggest. “Out of the Void” launches as a midtempo rocker but shifts gears quickly to a loping ballad, then back again. The shifts add a welcome texture not often found in this sort of music. The soulful “Under the Rug,” with its 3/4 beat, reminds of nothing so much as Emmylou Harris. “Most Alone” rocks out in a manner that non-rock fans can still enjoy; its stuttering underpinning deserves special mention. “Providence RI” evokes a late-night, end-of-set number, with a single dim spotlight on the vocalist and her guitar. The title track features an odd gunshot-style drumbeat that works well in the context. “Caged Bird” kicks off with a trumpet line and settles back into a smoky groove that will be enjoyed by fans of Bonnie Raitt.

Sparks seems to have approached the arrangement of each song on its own; while the album holds together as a collection, it’ wisely avoids the write-the-same-song-twelve-times approach favored by many young artists. Every track on Under This Yellow Sun sounds like Tori Sparks, but none of the songs sounds like another one. If there’s any criticism of the album, it’s in the disc’s lack of vocal harmonies. But Spark’s voice is strong enough to carry the day, and these are all her original compositions, so she has earned the right to arrange the songs her way.

In sum, this is a varied album well worth a listen. And be sure to check out the intriguing video of “Cold War,” included on the CD and featuring plenty of shots of the lovely and talented Ms. Sparks.