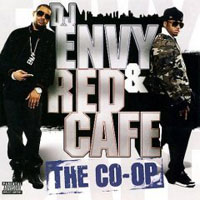 On first listen, my attention was grabbed by a track (or “skit,” as it’s called on the disc) in which a character named DJ Death Murder Homicide rattles off every gangsta cliché while recording his latest joint. The recording ends, and it is quickly (and amusingly) revealed that Mr. Homicide is a total phony; one can picture him in a Polo shirt and khakis. The Co-op contains two more of these “Keeping it 2 Real” skits, forming a brief narrative.

An album built around this idea would be intriguing: examine the posturing and artifice of rap, and expose it as such, all while entertaining. But that’s not exactly what we have here. Juxtaposed as they are, the remaining dozen-or-so tracks are an exercise in irony. Many tracks (“School of Hard Knocks,” “What it Be Like,” “Move Like a G”) trade in just the sort of macho rap shibboleths skewered on the “Keeping it 2 Real” tracks. The shopworn guest-star practice is employed here: among others, we get Fabolous, Styles P and Remy Martin. Too many “yo, it’s me, DJ Envy in da house”-style intros waste the listener’s time. We know who you are, gentlemen; your names couldn’t be any bigger on the album cover.

Oddly, the album improves as it spins. The standard-issue rap “Shakedown 4 Life” has a worthwhile musical backing. The same can be said of “Things You Do” (featuring Nina Sky, which of course she tells you) and “Invincible.” The album ends with its best track, “Mr. Lover,” but even then it reiterates every hip-hop bromide (in case you missed any).

As far as we know, there is no truth to the rumor that the duo will continue DJ Death Murder Homicide’s exploits on a followup entitled The Post-Op.