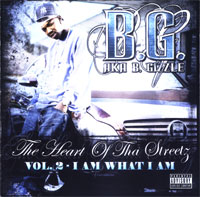 In 2006, intentional mangling of words (anything-izzle) and “creative” spelling are the hiphop equivalent of a rocker bellowing “Hello, Cleveland!” Fans of more-of-the same are in for a treat with the latest release from B.G. aka B. Gizzle aka Christopher Dorsey. On his latest, The Heart of Tha Streetz Vol. 2 – I Am What I Am, B.G. raps over eighteen tracks, covering territory familiar to Dirty South aficionados.

B.G. sent out enough guest invitations to fill an Escalade; all but three tracks feature guest artists. To his credit, the man credited with giving the world the phrase “bling bling” chose well. By far the best track on the disc is “Move Around,” featuring Mannie Fresh, one of the founders of Cash Money, B.G.’s former label. “Move Around” boasts a driving beat that all but forces the listener to obey its command, and Mannie Fresh is a spirited vocalist, free of the crypto-stoner mumblings found elsewhere.

No Dirty South styled release would be complete without a helping of misogyny (or humor, depending on one’s viewpoint and/or gender), and I Am What I Am does not disappoint. In some alternate universe “P**** Pop” is schoolyard jump-rope doggerel. And B.G. employs generous use of the N-word, the F-word and their frequent lyrical fellow travelers. Back when B.G. was in diapers, that was shocking, revolutionary. Not today.

Still, a handful of the beats are relatively strong. And there’s lots more where this came from: Volume 1 dropped eight months ago, and New Orleans native B.G. has an extensive back catalog.