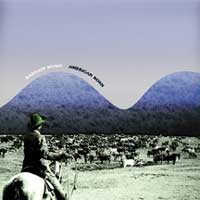 To a rock and roller’s ears, it’s often difficult to discern the difference between an earnest effort from a singer/songwriter and parody or mockery. In perhaps the same way that fans of pap-pop might have screened This is Spinal Tap and come away nonplussed, saying, “I don’t know. They aren’t a very good band,” this reviewer wasn’t sure what to make of American Born, the latest from Bargain Music. So a bit of Googling was in order.

Said search revealed that Bargain Music is “quirky and eccentric.” Oh? Well, Captain Sensible this is not. One suspects this material could have worked in a live setting: a café full of in-the-know scenesters, obligingly chuckling at every inside joke…that would have helped the uninitiated listener.

For a band-credited release, American Born sounds curiously like a solo effort. But within the disc’s high concept (acoustic guitar and lone vocal) there simply isn’t anything for Josh Fischel’s bandmates to do. One hopes they spent the session time doing something worthwhile, like hanging outside the studio doing Jay and Silent Bob impressions.

As music as it pains to say so, eclecticism does not always equal cleverness. Covering The Who, Peter Tosh and Tears for Fears might look like a good idea on paper; on disc the songs are mostly stripped of whatever made them wonderful.

Certainly not awful in any way, American Born might hold appeal for fans of campfire singalongs, or for followers of Bargain Music. For the rest of us it falls flat.