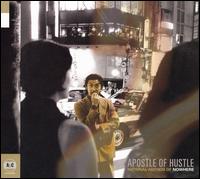 What to make of this disc? The first track, “‘My Sword Hand’s Anger,'” bears similarities to the work of the late Malinese guitarist Ali Farka Touré. Yet when the melody kicks in, it sounds more like an Unplugged-style take on indie rock, with sampled female laughs. It’s catchy yet odd. The title track takes a more straightforward approach: propulsive beat, memorable melodic line.

Apostle of Hustle is described as Cuban-influenced post-rock coming out of Toronto; that’s an apt description of this sorta-side project from Broken Social Scene’s Andrew Whiteman. Though, too much may have been made of the Latin influence. While horns (trombones and tenor sax) fade in to excellent effect on the title track, overall it’s just fairly straightforward (ok, slightly enigmatic) rock, with little “post-” about it. There’s a faintly noir-ish feel to many of the tracks, and the album has a decidedly laid-back, nighttime vibe.

Frustratingly, there’s an overdriven quality to many of the vocals (as if mic input levels were set well into the red). A wide variety of instrumentation is used to excellent effect throughout: brass; acoustic piano; a lone snare drum; and very African-sounding percussion, especially on the opener and the overtly strange “Haul Away.” At the other end of the spectrum is “Chances Are,” a jaunty Silos-meet-the dB’s number.

National Anthem of Nowhere is a varied album; pick any track at random, and decide if you like it or not. Does that give any indication of how you’d feel about the disc’s other eleven tracks? No; none at all. Good luck.