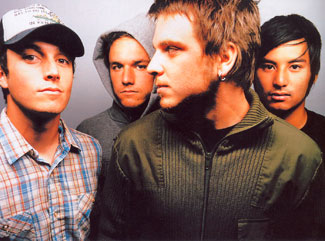 Dedicated fans can be a fickle bunch. They develop a strong affinity for a particular group based on any number of factors: personality, looks, lyrics, even the music. But some fans will freeze the group’s image in time. Woe be unto the group, then, if their personality develops, their hairstyles change, or — heaven forfend — their musical approach evolves into something even a little different.This situation isn’t the norm, perhaps, but it does describe a vocal minority. In 2005, on the eve of their newest CD release, Orange County-based Thrice is facing a mini-revolt from some fans who, it would seem, think the group’s music should repeat itself ad infintum. Which is surprising, since Thrice has always been a band on the move.

For a band that’s so articulate, both lyrically and instrumentally, they deal with a lot of misconceptions. In some quarters Thrice’s stance has been described as “political.” While it’s true that they donate a portion of each album’s proceeds, the chosen beneficiaries tend to be uncontroversial. And while the group’s lyrics explore both the personal and the universal, they’re not really political in nature. Lyricist Dustin Kensrue contends that his songs “deal with things that are happening with us and around the world, but not necessarily from a political point of view.” Political lyrics, can be, he says, “narrow and divisive, and I really don’t want to deal with that in my music. Music is something that can speak to a lot of different people in a lot of different ways.”

Repeating ourselves musically would be worse than sitting around writing advertising jingles.
–Dustin Kensrue

So what of the fans who wanted Vheissu, their latest release on Island, to recycle the music of their past albums? “I’ve been writing a lot of slower ‘epics,'” says Dustin. And he sees the band’s development as a logical progression: “I think that ‘Image of the Invisible’ (the first single from Vheissu) is the biggest link between our past and the new record. It’s going in new directions, but the rest of Vheissu is even more different.” Kensrue asserts that the album represents “a very large shift.”Indeed, Thrice’s approach — organic, adapting — may empower the group to weather changes in musical fashion: “it’s a lot more likely we’ll survive, being in a band where we’re challenged and challenging each other.” Kensrue is unequivocal on this score. “It would be the most awkward, terrible job experience” to repeat themselves musically. “It would be worse than sitting around writing advertising jingles.” 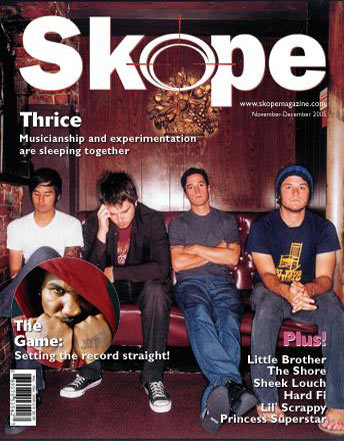 Thrice has shown a willingness to stretch out more than some of their contemporaries. That musical exploration is key to the band’s artistic expression: Dustin says there are a “million” sonic areas they’d like to explore, to get their musical point across. The new record makes use of Rhodes piano, synths, organ. “Different instruments hold a different tone and emotional quality; they allow us to move ahead and branch out.” He sees the new album as a “gateway to go even further with different sounds and different approaches” in the future.

Some groups take the approach of writing a ton of new songs, then throwing them against the wall (so to speak) to see which ones stick. Not Thrice. “I’m not a really prolific writer,” explains Dustin. “I get really focused on the songs I do write. I’m very particular about meter, rhyme schemes, alliteration.” He strives to make the words “beautiful, even if you read them without the music.” He describes the new album’s lyrics as “positive. Even though it’s pretty ‘dark’ at points, there’s definitely a theme of hope that runs through it.” Vheissu‘s cover art — a sort of Blue Öyster Cult meets Dr. Phil — reinforces this dialectic. “To be honest,” offers Dustin, hope “is not really present in a lot of modern music.” Even the song titles bear out the optimism: “Hold Fast Hope,” “Stand and Feel Your Worth.”

As a group, Thrice is more in their element onstage than in the studio. Studio sessions are in some sense an attempt to get their live show down on tape. To that end, much of Vheissu was recorded “live” in studio, the band playing the songs together rather than layering instruments one by one. It’s all part of keeping the organic feel to the music. Still, the recording of Vheissu was an exacting process. “We worked on this record for a year straight.” 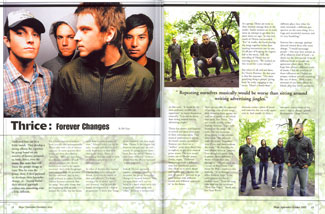 But when it’s all said and done, for Dustin Kensrue, the best part is that fan response. “The most gratifying thing is people ‘giving back’ by really engaging in the music. There’s a bond when someone creates a piece of music and someone else can really appreciate it. And usually it’s from a different place than what the artist intended; a different perspective on the same thing. It’s a huge and wonderful mystery, and it’s very humbling.”

Kensrue has a message, perhaps directed toward those who resist change. “I would encourage people — who may have written us off as whatever kind of band — to check out the new record. A lot of different kinds of people can appreciate what’s there. We’re huge fans of many different kinds of music; I feel the synthesis of those influences on Vheissu are unique, without actually sounding like any of them.” With a commitment of one more album for Island, plus that label’s option for two more, expect more of the same — that is, change, growth, development — from Thrice.