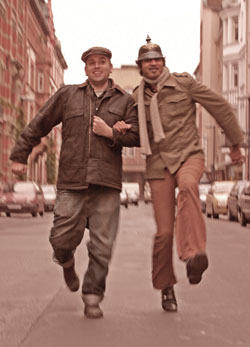 The King Khan and BBQ Show is the same as other rock and roll acts, only different. They’re a duo, and the only instruments — both onstage and on record — are guitar, percussion and vocals. Sound familiar? Maybe you’re thinking of The Flat Duo Jets, Dexter Romweber’s band from the 80s. Or maybe the White Stripes. Or the Black Keys. Or if your hipster quotient is lower, maybe the best you can muster is a mental image of Local H.

Not only does KK&BBQ sound unlike any of those acts, but they’re far more colorful. King Khan (he also goes by Black Snake; no word on his “real” name) is of east Indian descent; raised in Montréal, he built much of his reputation playing throughout Europe. He plays guitar and sings in a wild-man style that echoes Little Richard. King Khan is equally famous for his work fronting The Shrines, a 60s-garage-meets-James Brown revue that simply must be seen and heard to be believed.

BBQ (pronounced “barbecue”, but born Mark Sultan) sings, and plays guitar and drums. Sometimes those drums are a kit; other times they’re mounted to his foot, like Dick Van Dyke in the opening scenes of Mary Poppins. He played drums in the underground sensation Les Sexareenos, toured solo for a while, and played with Khan in The Spaceshits (nice name…). 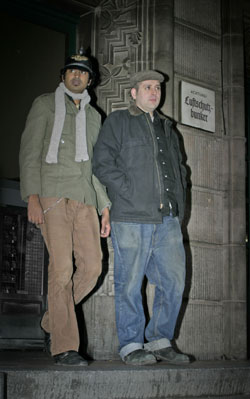 Fun and aggressive, The King Khan and BBQ Show offers a stripped-down version of these musicians’ vision. King Khan says that “We try to keep things really simple; we try not to bite off more than we can chew.” BBQ adds that “There’s a chemistry there. We’re on the same wavelength when it comes to music, so we can add both of our stuff in there and come up with something that’s got a magical feeling.”

Magical? That’s one word for it. During our interview — the duo was traveling through what was described as “Nowheresville, Utah” — BBQ confided that “We step up each others’ nonsense. Like, he’s giving me the finger right now, and I’m kicking him in the balls.”

A quick listen to either of the duo’s albums (the 2006 release What’s for Dinner? and 2007’s The King Khan and BBQ Show) clues the casual listener in to influences that include 60s punk and 50s rockabilly. But there’s more in the mix: asserting that they’re “not purists in any way,” King Khan cites a love for “doo-wop and traditional old rock and roll.” BBQ adds that “There’s a lot of black influence in our music, rather than just the straight-up white rock and roll.” In fact, their upcoming single “Animal Party” (release date not yet set) pushes vocal harmonies to the fore while maintaining the underpinning of reckless abandon that’s a hallmark of KK&BBQ. 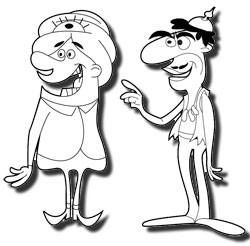 As might be expected, they’re a pretty wild act onstage. BBQ says, “At the show, you should expect two really silly dudes playing music that you can dance to.” He admits that theirs is “very primitive music; it’s very sparse. But ultimately, it’s there for you to dance to. Or to kiss your partner to. And even if a song has a particularly nasty vibe to it, it’s still meant in good fun.” King Khan is less philosophical, more direct on this issue: onstage “It can get pretty retarded and crazy. Expect complete, beer-fueled mayhem.”

The pair has energy to burn, and shows no sign of slowing down. King Khan says that “We’re doing about forty shows on this leg of the tour. Then we’re supposed to go to India in January to tour with the Black Lips. Then next March and April, Mark’s band and the Shrines are going to be touring together all over North America.”

BBQ yawns — they both yawn throughout the interview, having just woken up on the road in Utah or wherever — but still manages to get his point across. “We’re the luckiest people in the world, to be able to do what we do.” So with all that energy spent onstage, should we expect an all-night performance? “We can play for hours and hours, I suppose. How long we play depends on how the audience reacts.” BBQ jokes that if it goes badly, “We’re out of there in 45 minutes.”

The King Khan & BBQ Show performs at The Grey Eagle on November 25.

An edited version of this feature was published in the November 19 2008 issue of Mountain Xpress.