The Strange Odyssey of Roky Erickson 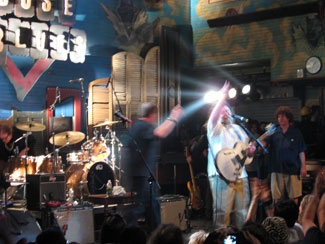 The history of rock ‘n’ roll is replete with all manner of tragic stories. In a few rare cases, the stories turn around into something more positive. Roky Erickson’s is one of those stories.

Erickson was the founder of the first psychedelic rock group, the Thirteenth Floor Elevators. The group was renowned for its 1966 psych-punk classic “You’re Gonna Miss Me,” and for attracting unwanted attention from the local authorities for blatant use–and celebration–of illegal drugs. Roky was erratic even without the introduction of psychoactive substances. As producer Stu Cook* told me, “Roky just always got turned on by people who didn’t always have Roky’s best interests at heart. There were a lot of people hanging around with chemicals, and Roky just tried ’em all.” Arrested in 1969 for possession of one joint–no kidding–Erickson plead not guilty by reason of insanity. Diagnosed as a paranoid schizophrenic, he thus began a decades-long odyssey in and out of what Cook calls “the One Flew Over the Cuckoo’s Nest era of institutional care for the mentally ill.”

Fans, admirers and friends tried to help him. Cook produced Roky’s first post-Elevators endeavor, 1981’s The Evil One (aka TEO). Cook recalls, “I flew from California to Austin. And then I had to go out to [Rusk] Texas State Mental Hospital to get Roky out. I remember having to put on a tie–you had to wear one–all the patients thought I was a doctor! We took Roky to the studio, and then at the end of each day we had to take him back to the hospital!”

There were a lot of people hanging around with chemicals, and Roky just tried ’em all.
–Stu Cook

Stu says “You never knew which Roky was going to show up at the session. Sometimes we’d just have to send him ‘home.’ Often he was too much under the control of…something else…to really make it work.” But Cook carefully pieced an album together, and says that Roky “loved it.” Cook believes that “Roky and Syd [Barrett, founder of Pink Floyd] have a lot of similar characteristics. Both gifted people who lived with demons.”

Speaking of demons, grotesque horror-movie imagery was Roky’s lyrical stock-in-trade in his post-Elevators days. Cook remembers an especially memorable track off The Evil One. “One of my favorite songs was ‘I Think of Demons’–Cook pauses mid-title for effect–‘For You.'” He laughs. “It’s almost like a love song!” Stu makes sure to point out that Roky was no puppet in these sessions. “The thing was, all these ideas were Roky’s. But they had to go through me as a filter.” 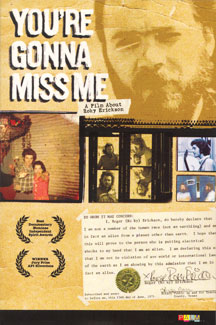 Roky’s tale is the subject of a new film by Texas native and director Keven McAlester, who refers to Roky as Texas’ own “Loch Ness Monster.” You’re Gonna Miss Me examines Roky’s mental health system saga, and his relationship with his mother. “What white male doesn’t have mother issues?” asks Stu Cook rhetorically, while noting that Roky comes from “a very eccentric family…I’m choosing my words carefully here.” With similar understatement, McAlester calls Roky’s relationship with his mother “complicated.”

The documentary–shot between 1999 and 2002–traces the efforts of Roky’s youngest brother Sumner to emancipate Roky from his mother’s “care.” When McAlester began the project, Sumner hadn’t started proceedings; Keven jokes that “not only did I not know what was going to happen, but I didn’t know how to make a movie!” McAlester admits that the original idea for the film was “what happened to [Roky], and where he is now,” and that the rest “unfolded as we were filming, which is arguably more interesting.”

McAlester insists that Roky’s “music itself makes great records,” but for a film, “you need a story to tell. And the story of who Roky [is]–and how he got to where he was–makes it interesting to somebody who might not care about the Elevators.” 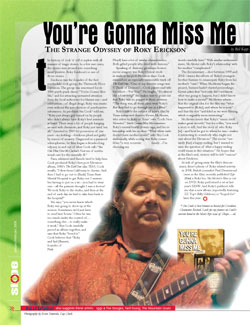 The movie “certainly [has] a happy ending, but I wanted to raise the question of what a happy ending could mean in this situation.” He hopes that at the film’s end, viewers will be left “curious” about Erickson.

At risk of giving away the film’s denouement, there’s plenty of Roky-related activity in 2008. British journalist Paul Drummond (seen in the film) recently published Eye Mind, a Roky bio. McAlester’s film is out on DVD. Roky performed a set at last year’s SXSW. And Roky’s publicist tells me that a new album (reportedly featuring ZZ Top’s Billy Gibbons) is “hoped for” later this year.