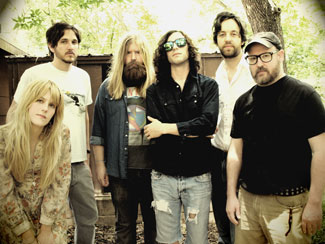 In the 1960s and 1970s groups like the Byrds and the Flying Burrito Brothers explored the common ground between rock and country. Their best work in this hybrid genre showed that pedal steel guitars and country-based songs structures could find a home in the rock idiom (and, more importantly, with rock audiences). In the 1980s other groups continued in this vein; most notable is the work of “paisley underground” acts like The Long Ryders. In all of these cases, the groups featured players with a sense of history; they wanted to create something fresh and new, yet they were unafraid to mine the best of what had come before for ideas.

And so it is with Austin-based Brothers and Sisters. This group’s original songs call to mind many of rock’s heroes, the great vocal groups and any assortment of country-influenced acts.

“We’re all about the harmonies, and the 1960s and ’70s aesthetic: a lot of guitars, and even psychedelia,” says guitarist Daniel Wilcox. “There are so many people in the band, but we have a lot of common threads.” This variety is reflected by the songs on their second album Fortunately (released September 19). There’s plenty of up-tempo rock, and a fair share of high-lonesome singer/songwriter material as well. “We were never too shy about showing who our influences are,” Wilcox admits. If listeners hear echoes of the aforementioned bands, that’s okay: “That’s the music that we love. If [we sound] like that, then we’re doing something right!” 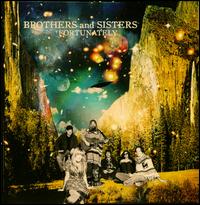 It’s often difficult to present such a varied set of songs — even when they’re of uniformly high quality — in a live setting. Wilcox admits that “in the past, a lot of the ‘quieter’ songs didn’t make it into the set; you want to grab people’s attention, so you go with the more rocking stuff, the more band-oriented songs. But recently, we’ve been trying to work in some of the folkier, more singer/songwriter type songs.” Still, he admits that “Live, people want to see a show, so the balance has to be more toward the rocking stuff.”

Daniel Wilcox puts a lot of thought into getting the right guitar tone for each song. Leader Will Courtney pens the music and lyrics, but arrangements are by the collective. Wilcox’s guitar parts unfailingly strike the right vibe for Courtney’s lyrics; for his part Wilcox says that his guitar work is “all in service to Will’s songs.”

Wilcox paid his dues right here in Asheville for about ten years. While attending UNCA he played with locals LuvSix (he describes that group as “a trashy rock and roll/country kind of band”), the Ether Bunnies (“a three-piece instrumental post-rock band” often found onstage at Vincent’s Ear) and still-alive-and-well garage rockers the SexPatriates. While in Asheville, he met drummer and Austin native Greg McArthur. Eventually McArthur moved back home, and when Wilcox ended up there, the two reconnected. According to Wilcox, McArthur phoned him up and said, “I’m playing music with this guy, and he’s got all these songs. I think you’d work out really well.”

Despite the ace playing of Wilcox and the other multi-instrumentalists (live, you’ll see and hear pedal steel guitar, electric piano and much more), Brothers and Sisters are no jam band. “Live, we try to keep ’em short and sweet,” Wilcox explains. “We’re more into the song craft, more into the pop aspect rather than the jamming.” Fans of classic pop might find themselves sporting a wide grin when listening to Fortunately: co-lead vocalist Lily Courtney (Will’s sister) isn’t afraid to “ba ba ba,” evoking the “sunshine pop” of groups like the Turtles and Fifth Dimension.

I ask Wilcox if the band is conscious in trying to straddle a classicist approach with a current, modern aesthetic. “I think what you have to do is not think too much about it,” he reflects. But “we can’t try and recreate this nostalgic thing. The ‘ba ba bas’ in our songs are a natural thing: that’s what we listen to, and that’s what we want to hear. We just naturally think, ‘what belongs here?’ But if you over-think it, it gets too self-conscious.” For Brothers and Sisters, Wilcox says that those sounds “come from a natural place.”

Brothers and Sisters perform at the Emerald Lounge on September 16.

An edited version of this feature was published in the September 10 2008 issue of Mountain Xpress.