Boston quartet Aberdeen City is re-releasing their 2005 debut, The Freezing Atlantic, with a steady stream of live dates to back it up. Their sound mixes equal parts Radiohead and Radiohead. Okay, just kidding, but the group does owe a sonic debt to the group from Oxford. Aberdeen City’s guitarist Ryan Heller doesn’t bristle at the comparison. “On first or second albums, every group gets compared to somebody else so there’s a frame of reference. There are certainly worse bands out there to be compared to.”

Aberdeen City recorded and released The Freezing Atlantic in 2005, but recently went back into the studio with Steve Lillywhite (U2, XTC, Kirsty MacColl, Morrissey, Phish) to retool, remix and in some cases re-record several numbers. Pressed as to how and why the new version is superior, Ryan says, “the changes are pretty subtle on the new one. We went back and touched up a few songs, and had the whole thing remastered. We spent more time this second time around. We were able to look at things like, ‘what key should this song be played in?’ and other details that allow a big change to be made by doing something subtle.”

The sounds on The Freezing Atlantic evolved in a deliberate fashion. Heller says, “we decided early on that we didn’t want to layer the album with too much stuff that we wouldn’t be able to go out and reproduce onstage. With certain songs we’d come up with an approach, and say, ‘let’s make the guitars sound like this,’ but at the end of the day, they’re still going to sound like guitars. But as we pushed them in one direction or another, we could come up with something more interesting-sounding.” And in keeping with the live aesthetic, little instrumentation beyond the two-guitars/bass/drums setup was used: “there are a few brief moments of violins, and piano for maybe about ten seconds somewhere on the record.” 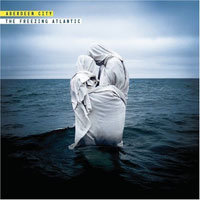 The striking cover art deserves mention. Artist Adam Larson’s haunting, enigmatic cover art has strong echoes of the work of Storm Thorgeson, specifically his cover art for Pink Floyd. Ryan says that Larson “asked us each to submit a list of a handful of album covers we really liked – for whatever reason: because we liked the record, because we found the artwork striking. He took the common threads of those album covers.” Larson had already decided to do something photography-based, and, as Heller describes it, that was “based on a central image. He spent a bunch of time with the music, and from there it was pretty much his concept.” As to its meaning, Ryan suggests, “if you’re going to look into it, to try and make some connections with the music, there’s both intimacy and distance represented there.” He goes on to say that the cover art is, like Aberdeen City’s music, vague and specific/deliberate all at once. 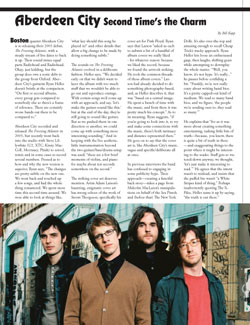 In previous interviews the band has confessed to engaging in some publicity hype. Their approach — creating a fanciful back story — takes a page from Malcolm MacLaren’s manipulations on behalf of the Sex Pistols and (before that) The New York Dolls. It’s also over-the-top and amusing enough to recall Cheap Trick’s wacky approach. Ryan Heller lets loose an embarrassed gasp, then laughs, shifting gears while attempting to downplay the whole matter. “Well, you know, it’s not hype. It’s really…” he pauses before confiding a bit. “Frankly, we’re not really crazy about writing band bios. It’s a pretty capped-out kind of medium. We read so many band bios, and we figure, ‘the people we’re sending ours to, they read so many.'” He explains that “for us it was more about creating something entertaining, taking little bits of truth — because, you know, there is quite a bit of truth in there — and exaggerating things to the point where it might be interesting to the reader. Stuff gets so watered-down anyway, we thought, ‘let’s just make it interesting to read.'” He agrees that the intent wasn’t to mislead, and insists that the puffed bio wasn’t “a White Stripes kind of thing.” Perhaps inadvertently quoting The X-Files, Heller sums it up by saying, “the truth is out there.”