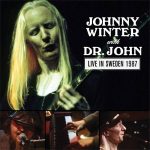 There are countless recordings of Johnny Winter live onstage; they all exist at various points on the spectrum of legitimacy. A new archival release, Johnny Winter with Dr. John – Live in Sweden has a number of things to recommend it. The recording dates from near the end of Winter’s time on Alligator Records, a
Read More
According to his publicist, legendary guitarist John Dawson Winter III died on July 15 in his Zurich, Switzerland hotel room. I count myself lucky to have interviewed Johnny Winter twice (please see the list of links at bottom of this essay), and to have seen him play onstage once. I know very little about albinism,
Read More
There’s no point in tip-toeing around it: blues guitarist Johnny Winter is old and frail. The cumulative effects of decades of drug and alcohol abuse/addiction (happily, he’s clean now) coupled with the medical problems associated with albinism make the odds unlikely that Winter would even still walk this Earth at age 68. But indeed he
Read More
I forgot something important when I published my review of the new/archival release from Johnny Winter. A great gift idea for the JW fan who has everything, this new Johnny Winter bobblehead is pretty clever. It’s a nicely-put-together statuette of JW circa the 70s/80s, and bedsides looking very much like an accurate cartoon representation of
Read More
With apologies to Firesign Theatre, file this pair of releases in the Department of Redundancy Department. Not that the music and performances on Live at Rockpalast aren’t ace — they most certainly are, as is nearly always the case when it comes to fiery blues/rock guitarist Johnny Winter – but the same ground is being
Read More
It’s all well and good to demand the highest standards in video quality in a concert film. Technology has progressed to the point where viewers pop in a music DVD expecting to see high quality digital transfers, 5.1 digital sound, and expert camera work. But sometimes, if the content itself — you know, the actual
Read More
Let’s get this out of the way right up front: you’re either going to absolutely love Live at the Fillmore East 10/3/70, the new CCM Live archival release of an early date featuring Johnny Winter And, or you’re gonna hate it. Me, I’m firmly in the former camp. And while it’s true than an hour-plus
Read More
Happy Birthday to Johnny Winter. Here’s a feature I did on the legendary bluesman from a couple years back. Blues/rock legend Johnny Winter is one to-the-point dude. His second guitarist (and manager) Paul Nelson–a fine guitarist in his own right–coached me in advance: “hit him hard, because he’s not…wordy.” Nelson was right. The 63 66-year
Read More
The DVD kicks off with a true oddity, a performance that is bizarre in any number of ways. This excellent-quality Danish TV clip from 1970 finds Winter playing with his original blues rhythm section (Tommy Shannon on bass and Uncle John Turner on drums), but they don’t kick off with a blues tune. Instead they
Read More
First things first. Whenever a career-spanning anthology crosses this reviewer’s desk, three questions immediately come to mind: Has this artist’s career been summarized on disc before? How’s the sound quality on this disc? Does the package include some sort of added value? The answers to these questions (and to the further questions they suggest) pave
Read More