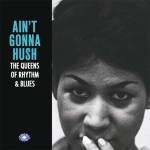 The hits just keep on coming. Fantastic Voyage is a London-based label that specializes in thematically-oriented archival reissue collections. In the last few months, they seem to have significantly stepped […]
Read More

Today features hundred word reviews of archival and reissue releases from American and overseas labels. The Brecker Brothers – The Bottom Line Archive This is the latest from the new […]
Read More
For American readers and listeners, this new compilation from Fantastic Voyage requires a bit of background; when I first laid eyes on it, I had no clue as to either […]
Read More
I’ve observed before that Fantastic Voyage makes full advantage of the unique copyright/licensing laws as they exist in the UK; in the United States, putting together a package such as […]
Read More
Once again, it’s time for a run of hundred-word reviews. My inbox has been overflowing of late, and even after removing the material that I deem not worth my time […]
Read More
Some familiar names and some true obscurities are highlighted in this, the first of five sets of five capsule reviews. This week I’ll review 25 albums, arbitrarily limiting myself to […]
Read More
As Kris Needs notes in his excellent and detailed liner notes for A Space Odyssey: From Birmingham to the Big Apple – The Quest Begins, Sun Ra was a practitioner […]
Read More
Here’s another installment in my occasional series of capsule reviews, this time covering new reissues and compilations. My self-imposed limit for this particular exercise is 150 words on each album. […]
Read More
Leave it once again to the people at UK-based Fantastic Voyage to put together an interesting compilation of in-danger-of-being-lost American music. Their latest entry is a 3CD set called It’s […]
Read More
Beginning in the 1990s, a mixtape was a collection of music designed as a background for a rapper. Said rapper would collect his or her favorite beats, and then do […]
Read More